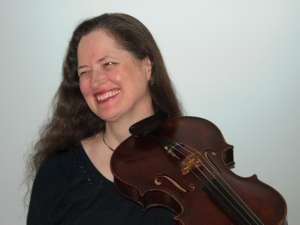 Originally from Edmonton, Elizabeth began her studies on the viola in the Edmonton Public School System and is now a freelance orchestral and chamber musician (viola) working in the Toronto area. She has played for the Canadian Opera Company, Royal Winnipeg and National Ballets, Stratford and Shaw Festivals, the Hamilton Philharmonic, the Kitchener-Waterloo Symphony, the Talisker Players and many other orchestras and ensembles. She is also familiar with show music, having played principal viola for Live Entertainment (ShowBoat, Sunset Blvd, Ragtime, Phantom...). For her chamber ensembles, she has created several well-received arrangements for string trio or quartet of standard and not-so-standard classical and pop pieces. After a collaboration with the Gala String Quartet and the bluegrass band, Whiskey Jack, a patron wrote, "The piece [Ashokan Farewell] arranged by the violist was exquisite". She is also a member of the Tost String Quartet, one of whose goals is bringing good music to shut-ins and senior citizens. Elizabeth dabbles in the visual arts as well, creating miniatures (watercolour, pencil crayon) and numerous original gif animations, as well as working on web design; her principal work is for the website for Peacemakers Trust, a Canadian charitable organization dedicated to research and education on conflict transformation and peacebuilding. In her spare time she bakes bread, often using wild yeast captured by her in the summer of 2007. She writes about her baking experiments as well as humanitarian and environmental concerns in her popular blog from OUR kitchen.

websites that I have designed . article written for "Wedding Belle" . a little more about me