summary: multigrain bread made into buns shaped like tabatieres AND loaves; submission for YeastSpotting; (click on images to see larger views and more photos) 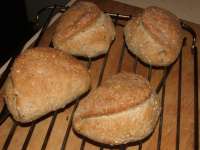 WHAT an evening we had last night!

The multigrain bread dough I made yesterday was turning out wonderfully. It was just the right consistency. It had risen to just the right level when it was time to shape it.

I decided to make it into two loaves and four buns shaped like tabatieres¹.

And when it came time to bake the bread, I had the brilliant idea to save energy by baking the buns on the top shelf above the bread. We were both congratulating me on how wonderful these bread and buns were going to be. The best yet!

(Did you hear that chord of doom?!

Being the truly brilliant person I am (*cough*), I put the buns in the oven when the bread was half done. That way, everything would be done at the same time.

With the requisite yelling and screaming.

What happened, you ask? When I went to take the buns out of the oven, they weren’t quite done. So I left them on the top shelf and began to try to remove the bread, using the peel, as I always do.

And here’s where the problem began. The bread had risen so well that it was just touching the top shelf. So I pulled the middle rack out a bit so I could access the bread. (You’ve studied physics? You already know where this is going, don’t you?) Then with my left oven-mitted hand, I lifted the top rack so it was no longer touching the bread and shoved the peel under the two loaves to pull them out of the oven. I had difficulty getting the peel under the loaves. So I shoved a little harder.

And shoved again… shoving the two loaves of bread right off the stone, through the gap made by the rack being pulled out (WHAT a moron I am!) and onto the floor of the oven right beside the element. And one of the loaves promptly burst into flames.

Moving fast, I removed the buns as T removed the rack with the hot hot stone. And the second loaf burst into flames. I closed the oven door, thinking I would starve it of the oxygen so the flames would go out. (Duh!)

Meanwhile, T was screaming at me to get the bread out of the oven; he couldn’t hold the hot rack with the hot stone much longer and there was nowhere to put it without burning something else.

Mercifully, while we were screaming, the flames went out on their own and I reached in (yes, I had just enough presence of mind to put on oven mitts) and pulled the sorry looking things out of the oven.

Sorry, no photos of the flames or the really sad looking decrusted loaves. In the first case, T couldn’t reach the camera and if I had thought to stop to take a photo, well, suffice it to say that I’m dumb, but not THAT dumb. In the second case, I just couldn’t bring myself to record the embarrassment of loaves that look like badly shorn sheep.

Lessons I have learned (I JUST figured out the final one this morning): 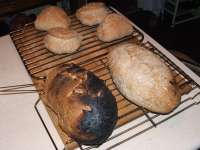 This morning, we shaved the burned outside crust from the loaves and put them in the freezer.

At least the buns survived being dropped on the floor when there wasn’t quite enough room on the counter so they overbalanced and fell (as far as I’m concerned, they pass the 15 second rule; there’s already too much grief to deal with…).

They were delicious for breakfast!

1. Tabatieres?? I didn’t know what those were either before reading Steve’s (Bread cetera) post about making diademes (tiaras) by pushing tabatieres (tobacco pouches) into a circular shape. Steve made videos, one of which clearly shows how to shape tabatieres. Do take a look. In fact, take a look at his whole site! He makes the most wonderful bread!

4 responses to “baking multigrain buns AND bread: a cautionary tale”