I’ve been meaning to post about this for eons! Since last summer, actually….

In winter, we almost don’t have to keep butter in the fridge. It’s pretty much the same on the counter as in the fridge; the butter is hard. (heh heh, I cannot help but think of Grandpa’s favourite response: it’s harder where there’s none!)

me, blog from OUR kitchen, annual Scrabble clout and cake fest 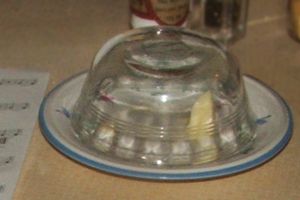 To stop the furry black fiend from sneaking onto the counter to eat butter, we have to put a hat on it. We put the butter on a saucer with a custard bowl inverted overtop.

For about 10 months of the year, the standard phrase (spoken through chattering teeth) in our house is “The butter’s hard…”. Then, for about 2 weeks or so, when left out on the counter on a butter plate, it softens a little and then stays at exactly the right softness.

But for the rest of the time, when summer hits with a vengeance, it turns into a semi-liquid greasy mess. In the past, we didn’t dare to leave the butter out. Unless we wanted rancid butter…. :stomp:

And then, one day last summer on holiday, as we wandered through the farmers’ market near my sister’s house, I saw some butter bells made by a local potter.

me: Look!! She has those cool French-style butter dishes for keeping butter on the counter in the summer!

me: No really, look! I’ve always thought these would be great to have!

he: [sighing] Yes, very nice. Can we focus on getting the corn on the cob and plums?

he: [looking at the price] I don’t know. Does it really work? What would we do with it if it doesn’t?

me: Look at the nice blue in the glaze! We could use it as a jam jar or something. [looking at the price and pausing] Hmmm. It’s not really really expensive. But, you’re right. We’d better not. [walking away reluctantly]

We continued on, strolling through the market to see what other things they had. T and my brother-in-law announced that they were going to get a little snack and take the dog for a walk and instructed us not to take too long.

My sister and I ignored them and stopped at every stall to admire everything, staying a little longer at some stalls to buy beautiful plums, onions, peppers, chard, corn, eggs and cheese. Then we headed back to my sister’s house to make lunch.

As we walked out of the market area, T handed me a paper bag, saying he’d brought me something. Being sure that it was food, I said I’d open it later to have at lunch.

he: It’s for before lunch! [looking excited] Open it now!

Do I have the best husband, or don’t I? 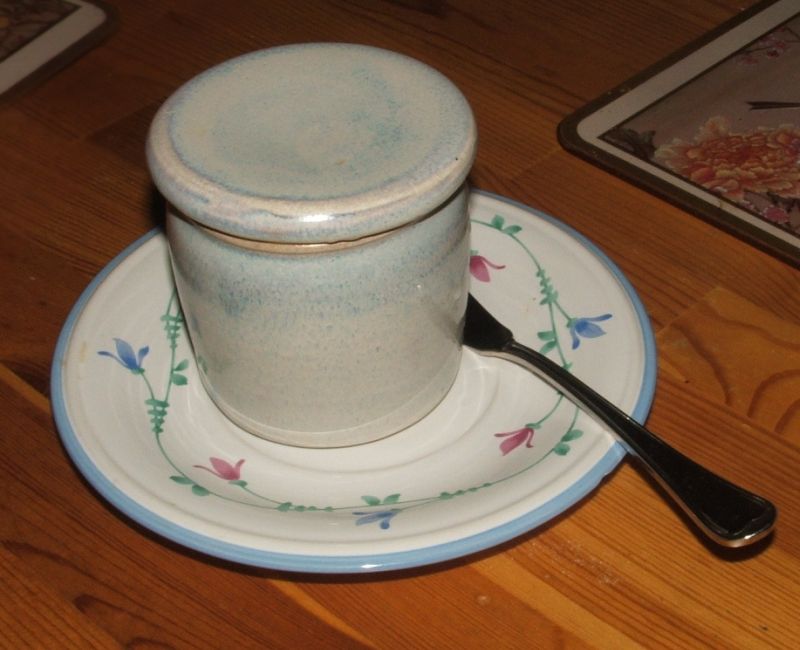 I’m not positive, but I think that our butter dish was made by Penny Swanson of the Burnaby Potters’ Guild…. 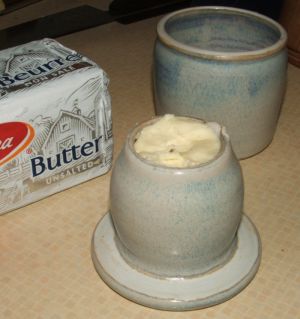 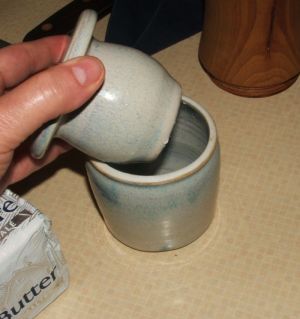 Interestingly enough most people I have met from France have never seen one […] [T]he French Butter Dish was invented in Normandy or Brittany in the late 1800’s. Both regions were famous for butter production at that time.

The unique design of the French Butter Dish keeps butter at the perfect spreading consistency. The water creates an airtight seal that keeps oxygen away from the butter (oxygen is what turns butter rancid). In the bell shaped lid your butter will stay soft and fresh!

You bet it does!

Butter containers, or Beurriers, appeared on tables as early as the 1200’s. They were made of porcelain ceramic and metal, solely for preserving butter. The problem of preservation forced people to keep butter in salted water. By the turn of the nineteenth century, a butter dish was designed which is still in use today. It is a crockery jar with a cover. You put salt water in the jar. The cover is recessed, and there is where the butter goes. When the butter is not being used, you flip the cover, so the butter is dipped in the salt water. 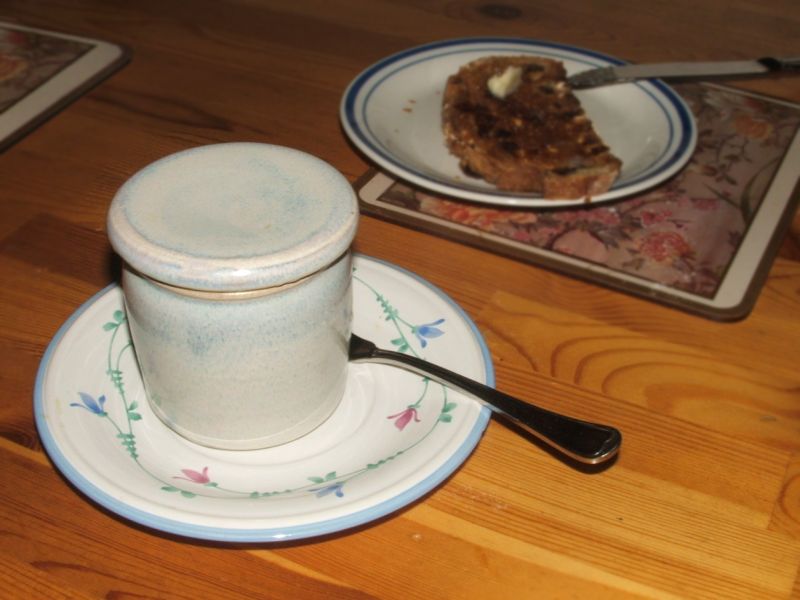 It’s exactly what I’ve always wanted,
a very extra special thing.
It’s useful and quite pleasant,
and is just the sort of present,
that is fit for a king!