summary: recipe for beet cakes (beet fritters); these are even better than corn cakes; make sure the egg yolk doesn’t break when you separate the egg; click on image(s) for larger views and more photos

Ah, substitutions! I love substitutions! Years ago, I reported to my sister about the most amazing and wonderful stir-fried chicken with almonds that I had made. Instead of chicken, I’d used fish and instead of almonds I’d used sesame seeds…. 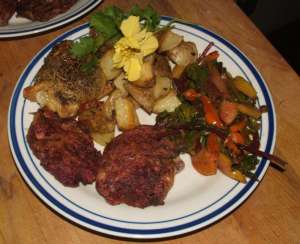 We cannot stop making corn cakes!! We just made them again a couple of nights ago. Except we didn’t have any corn. So we used beets. We didn’t think it possible but beet cakes are even better than corn cakes!

Or is it? It’s in very close competition with beet cakes.

This is so thrilling. Fresh corn season is almost over and we have been desolated, trying to think of how we can still have corn cakes when corn is no longer in season. But now we don’t have to worry any more.

How happy am I? Now I can have my cake and eat it too. I can get beet greens whenever I see them and rest assured that there aren’t several beets lying forgotten in the vegetable drawer of the fridge for ages.

And. We get to use our beautiful copper bowl more often.

The first time we made the beet cakes, we forgot to add a chili. They were delicious anyway. But they were a little dense, not quite as light and airy as corn cakes.

Well, duh. Beets are sweet like corn, but they don’t have the starch. And they aren’t nearly as liquid. 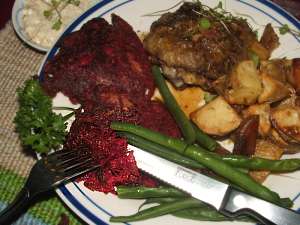 So, last night when we made the beet cakes again, we added a little yoghurt and some water. We also remembered to add the chili pepper.

Here’s what T did to make them:

1.) How much water? There’s that “some” as the measurement. It all depends on the beet. In this case we put in a couple of tablespoons, maybe more, maybe less. The way we decided was to guess how liquid the mixture would be if the grated beets were crushed fresh corn. I hope that makes sense!

2.) Separating the egg If you want your egg whites to go into peaks, it’s essential that the yolk doesn’t break. On this last time, alas, the yolk did break as we were separating it. While the whites did foam up quite a lot, they refused to go even close to peak stage. But still the beet cakes turned out beautifully.

3.) How much onion? There’s that “some” again. We put in enough to add a little flavour but not enough to overwhelm. The first time we added none at all. And the beet cakes were delicious. 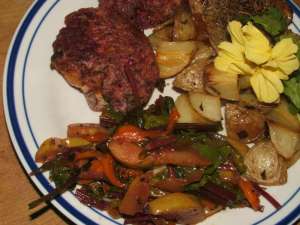 The first time round, the beet cakes were delicious with roasted rosemary chicken, beet greens with pears and oven-roasted potatoes with sage. Straw coloured nasturtium flowers were a beautiful touch. I love the fleeting hot sweet flavour of them too.

A few nights later, the beet cakes were just as delicious with roasted chicken thighs and a sherry reduction garnished with radish, fennel and nigella sprouts, steamed green beans, oven-roasted potatoes with rosemary and a little parsley.

Let’s have beet cakes again soon! But maybe next time, instead of beets, we’ll use zucchini. Or… hmmmm… what other vegetables should we try?

The ironic thing about last night’s dinner is that we actually found decent looking local fresh peaches and cream corn on the cob at the vegetable store on the weekend. (Nope, no photographic evidence. We ate it. :-))

If it ever ends. It’s poisonously hot again. How can this be??

edit: Take a look at this amazing video on how to separate an egg: YouTube: very cool way to separate yolk from egg white. (Of course, I will probably continue to use my usually chicken’s (bok bok bok) method to separate an egg and use the handy plastic gizmo that was given to me years ago.

2 responses to “corn cakes can’t be beat …or can they?”