There is nothing so disheartening as having to cut “sandwich” bread diagonally in order to get decent sized slices. 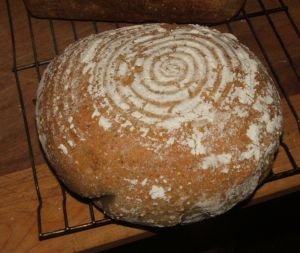 Lately, I’ve been having a lot of problems with producing flat bread when I haven’t wanted to. The crust is also on the blonde side. I think the flatness is partly because it’s summertime and I may be letting the shaped bread overproof. Or perhaps the dough is too slack. Or perhaps it was a mistake to clean the oven. Maybe our bread LIKES to be baked inside encrusted walls….

But I just can’t believe those are really the reasons!

After reading the following in Lionel Vatinet’s book “A Passion for Bread” (thank you for the recommendation, Tanna!), I remembered about the wondrous success of this hat method in creating oven spring – why oh why did I stop doing this??

One of the least expensive and most effective methods of achieving a crisp crust on your artisanal bread is by using a stainless-steal mixing bowl (about 12 inches in diameter and 5 inches deep) as the insulator. […] Quickly but carefully slide the shaped dough from the peel to the hot baking stone and cover with the stainless-steel mixing bowl. Immediaately close the oven door. Bake for 10 minutes; then, lift the edge of the bowl with the tip of a sharp knife and use oven mitts to carefully remove the hot bowl. Continue to bake until the bread is deep golden brown. […]

The dough must be scored before baking to allow CO² to escape as [bread rises] in the oven. In baker’s parlance this is called “oven spring.”

But I’m positive that Mum never scored her loaves before baking them. They were always incredibly lofty. And I’m pretty sure that I achieved oven spring without scoring eons ago when I followed this method learned on The Fresh Loaf:

When I saw several posts in TFL about using an aluminum foil roasting pan as a cloche, I thought I would give it a try. […] I preheated the oven and baking stone to 450 degrees F. Then I lightly misted the proofed loaf and the inside of the roasting pan with water and placed the loaf and roasting pan cover in the oven. The loaf was baked covered for 30 minutes covered at 450 degrees F, and an additional 15 minutes uncovered at the same temperature.

The foil pan is so much easier to handle than the dutch oven and gives terrific oven spring when used with the baking stone. 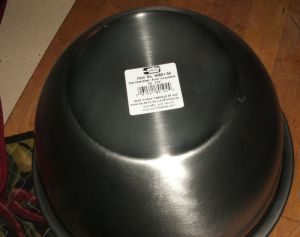 So, I thought I’d try it again to encourage both oven spring AND dark gold crusts. But with a shiny new 10 inch diameter, 6 inch deep stainless steel bowl we had just purchased. It was only $4!!

Fellow BBBabe, Jamie (Life’s a Feast) has been having problems with blonde crusts as well and doesn’t have a stone. So I decided to try the hat method without a stone, thinking it should work.

Well phooey. The stainless steel bowl hat without the stone beneath it doesn’t seem to make any difference at all to either the oven-spring OR the browning. 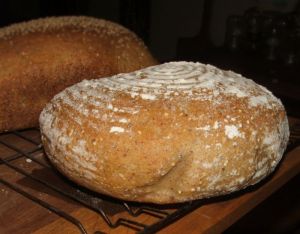 For the first experiment, the boule was placed in parchment papered pyrex pie plate and the stainless steel hat put over top for the first 10 minutes of baking, then uncovered for about 25 more. (The second loaf was put into one of our loaf tins and baked normally.)

Reading further about fixing blonde crusts, I found the following on The Fresh Loaf (another excellent resource – have I mentioned how much I love the internet?). Aha!! Vatinet did say something about making sure there was a seal on the rim of the bowl! (Duh. Of course, there would be a problem with the dry air rising from below the bread to dissipate any steam inside the bowl.

If the outside of the loaf dries out too early, then an enzyme called amylase doesn’t have enough time to convert starches in the crust into sugar. Not enough sugar in the crust means there will be insufficient caramelization for puposes of browning.

You can get a hard crust with no covering at all, but if you want the crust to brown, then the surface of the loaf must be kept moist for the first 10-15 minutes of the baking cycle.

– Dan DiMuzio, ‘Pan must not have openings anywhere around its bottom’, Bread won’t brown properly | The Fresh Loaf, December 23, 2011 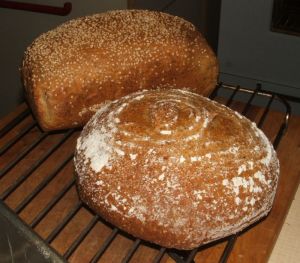 Still trying without the stone in the oven, my 2nd experiment was with the boule placed on a parchment papered pizza pan and the stainless steel hat over top with its edges inside the pizza pan for the 1st 10 minutes of baking than uncovered for about 25 more.

I was expecting great things this second time. But no. No oven spring at all. And the colour was not dramatically different either.

Now, I’m thinking that the stone must be essential. I haven’t tried the stainless steel hat experiment on the stone yet, but I’ll let you know the results when I do.

But not everyone HAS a stone, do they?

Searching around about “no oven spring”, I came across the following idea for baking stone substitution that might work:

If you don’t have a stone, invert a heavy baking sheet, cast iron griddle, or something similar, and heat that up in the oven the same as you would for a baking stone. Invert the sheet pan so it’s easier to slide your bread pans on and off the hot pan without having to deal with a small edge.

In the meantime, our sandwich bread remains flat as a pancake….

I guess I really should try doing this method with the stone. And maybe I should try spraying the inside of the bowl with water too….

On a happier note, I have become so adept at making flat bread that the other night that I made The Most Brilliant Chapatis!! (No photos. We were too busy eating them.)

We’re definitely having chapatis again soon. I’ll try to remember to have the camera handy.