summary: dealing with disappointing overripe corn by making corn and rice; red Swiss Chard turns black if there is no added vinegar; information about Two For Tuesdays! (real food); (click on images to see larger views and more photos) 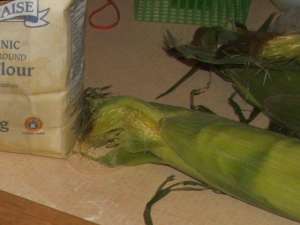 Is it possible that we missed corn season this year?! For years, we have always bought corn on the cob from the same little outdoor stall in Chinatown. It has always been great corn – sweet and tender. There are usually hoardes of people flocked around the giant purple net sacks of corn stacked up by the side of the stall. And not infreqently, there is a truck parked by the curb unloading more purple sacks of corn.

This year was different. At the end of July, thinking that corn on the cob would be the perfect thing to have with dinner, we headed into Chinatown. There was the stall, with corn on the cob: 7 for $2. That seemed about normal to us. What wasn’t normal was the uncrowded stall. And only about 8 sacks of corn stacked by the side of the table. And no truck.

But we bought 7 ears and headed home, excited about having corn on the cob with stir-fried red Swiss chard, oven-fried potatoes and barbecued chicken.

We decided to be extravagant and have two cobs of corn each. We eagerly sat down to dinner and I bit into an ear of corn. Wwaahhhhh!! It was tough and doughy!! It HAD to be an aberration.

T bit into an ear of corn. Waahwaaaahhhhhhhhhh!!! Tough and doughy!

I tried another one. Hmm not so bad. It was edible. Luckily, the fourth cob of corn was edible as well.

I removed the horrible corn from sight. (We both get very cranky when dinner isn’t right.) And we didn’t speak of it until the next day when we could discuss it calmly.

Now. We could have just put the other three ears into the compost and pretended that we didn’t have any more corn. But we HATE throwing food away. Even if it’s going to become soil to put into the garden. 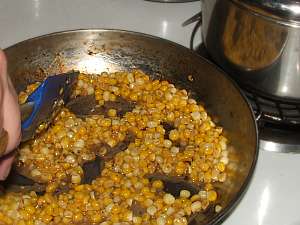 And T had a brilliant idea. We could have rice and corn. So, after tasting a few niblets from each of the three cobs of corn we had left, and discovering one more “Eeeewwwwwwww!!! Doughy!!” cob, T started preparing the corn to go into rice to go with Indian-style Swiss Chard and barbecued chicken with cashew coconut sauce I found in the freezer when I went on a defrosting and cleaning out the freezer rampage.

Using a sharp knife, he cut the corn off the cob and threw it into a little chicken stock in a frying pan. Then he heated up left-over rice in the toaster oven and stirred the corn in.

It was delicious!! No crying about tough corn that night! 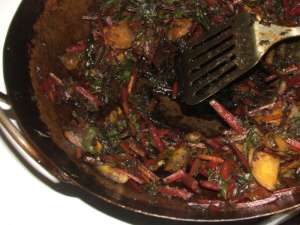 We also had a huge bunch of wonderful red Swiss chard that I got at the market. (Well, I thought it was wonderful!) T stir-fried it with potatoes (basically using our aloo methi recipe). To punish me for buying too much Swiss chard, he didn’t add a little vinegar so it turned a deep dark dark green on the plate rather than holding its lovely red colour. In spite of the loss of the red, the chard still tasted delicious. (Well, I thought it was delicious.) 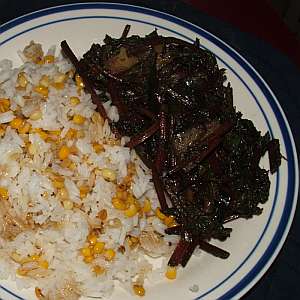 I WAS going to post this last Tuesday for “Two for Tuesdays (Real Food)”. But outside influences conspired against me last Tuesday. Not only did I misjudge the distance when I drove the car into the garage after a morning meeting and scraped the bumper against our spare bike’s metal pedal, but when I got inside the house, I couldn’t get into my computer.

There was major hair-tearing for hours as we tried to fix it ourselves. And it wasn’t fixed until the next morning when a tech guy could finally get here. Of COURSE it was an easy fix. One of those “you have to know the answer before asking the question” kind of fixes. Even though there had already been numerous attempts to get into the computer via safemode, it turned out that you have to know exactly when to press F8. Perhaps this is why there are so many computer space-invader type games. It’s too teach you how to have a quick-trigger finger for F8 to get into safe-mode…. (Sometimes I HATE windows!!)

I think it all must have been a pre Friday the 13th thing. I can’t tell if I should be very very afraid of what might happen today or if I should dance around in front of black cats under ladders, completely unafraid because I’ve already had all the Friday the 13th bad luck.

Hmmmm, maybe I should dance over to the vegetable store and buy some corn. Perhaps it will be stellar.

This event was created by Alex (A Moderate Life) with the idea that each “Two for Tuesday” post would contain two things (two recipes, two links, two variations on a theme… as long as the post is about real food. Alex, Heather (girlichef) and five other bloggers have joined forces to co-host this week. Heather wrote:

Where WAS it that I read recently about how to freeze corn? No worries, though. I have a whole year to find it. Our corn season appears to be over. We’re thinking that because everything is early this year – it has been so sunny and warm – that we must have missed corn season. How tragic!

5 responses to “Did we miss corn season? (real food)”