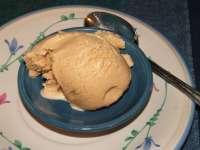 Oh oh!! Just when you’re thinking that it’s time to get back into your fitness routine and stop eating rich food, allow me to distract you for a second.

In late December, Jude (Apple Pie, Patis, and Pâté) posted a recipe for dulce de leche ice cream. Obviously, I was intrigued. And after T saw the recipe, his first question was, “We have to go to the store to get some sweetened condensed milk; haven’t you got your coat on yet?”

As soon as we got home, he began simmering the condensed milk so he could make this amazing ice cream….

I can’t believe how really fabulous it is. The flavour is like the best burnt caramel. T says it reminds him of Mishti Doi – that wonderful Bengali sweet that I’ve only had in Calcutta. (Does anyone make Mishti Doi anywhere else?¹)

Here’s what T did to make the ice cream:

:: 1 litre is approximately equivalent to 1 US quart

:: Jude reported that he based his dulce de leche ice cream recipe on one in Professional Baking by Wayne Gisslen. Like Wayne Gisslen, Jude calls for vanilla and salt in his ice cream recipe; we did not include those ingredients in our ice cream. For us, those extras are just superfluous. 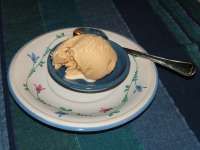 Dulce de Leche icecream is wonderfully rich and creamy and a little goes a long way. Serve it in small dishes. Savour each spoonful.

Mmmmm, but that’s good!!! (I bet it would be fabulous with a slice of hot apple pie.) We really can’t thank Jude enough for posting his recipe for Dulce de Leche Ice Cream!!

Now excuse me while I go to run on the treadmill for an extra ten minutes so that I won’t have to go out to buy larger clothes to accommodate the dulce de leche ice cream.

Actually, we don’t have a treadmill. But we did go out for an extra walk today. And we did a fair amount of snow shovelling. Does that count?

Mishti Doi is a thickened, reddish-coloured yoghurt sweetened with jaggery used as a snack or dessert in India.

It is not usually made at home, it is usually bought. It is sold in small, unglazed clay pots. The unglazed pots absorb any excess water that comes out after the dessert has set.

Mishti Doi is […] prepared by boiling milk until it is slightly thickened, adding a sweetening agent, such as sugar, gura (brown sugar) or khajuri gura (date molasses), and allowing the milk to ferment overnight. Earthenware is always used as the container as the gradual evaporation of water through its porous walls not only further thickens the yoghurt, but also produces the right temperature for the growth of the culture. Very often the yoghurt is delicately seasoned with a hint of aleicha (cardamoms) for fragrance.

The last time we asked if we could get Mishti Doi (aka Lal Dahi) in a Bengali store in Toronto, the fellow sighed longingly and said wistfully, “Only in Calcutta.” But when googling just now, I saw that there are a number of recipes for Mishti Doi.

We have milk; we have yoghurt (aka curd); we have jaggery; we have cardamom! We’re going to have to try making it too! Now if only we can get some earthenware pots….