Not long ago, one of my friends made leek and potato soup and posted about it on Facebook. Monkey see, monkey do.

Today I made leek and potato soup (otherwise known as Vichyssoise). The Scots side of me refuses to only use the white part, and as a result the soup was a rather lovely shade of green as opposed to pure white. Tasted excellent, however.

Ah!! The ultimate comfort food for a cold winter’s night: leek and potato soup and baking powder biscuits (Yes, Ken, no worries, we used the green parts of the leeks)

Don’t you LOVE Facebook? Thank you for reminding us about how wonderful leek and potatoes are together, Ken! 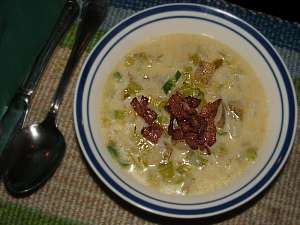 This soup was so good that we had it two nights in a row. It was even better the second night!

We decided that we wouldn’t purée the soup as is traditional. We like seeing the potato cubes and little half rings of leek floating around.

Here’s what T did to make this truly delicious soup:

Many recipes puree the soup. We prefer to keep it chunky.

This soup can be made ahead of time. (We think it improves if it sits and melds for a few hours.) Reheat carefully (please don’t allow it to boil) and serve with freshly made hot butter milk biscuits.

To make this into a vegetarian dish, use vegetable stock and omit the bacon. 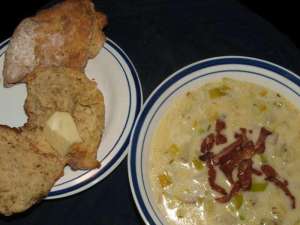 We served it with baking powder biscuits just hot out of the oven. Now THAT’S the way to deal with winter blahs!

Last night, we decided we neeeeeeeded to have the soup again. But we didn’t have any bacon. So we put roughly chopped ham right into the soup. It was equally delicious.

Oh oh. There are no more leeks in the fridge now. Good thing our favourite vegetable store had some really fabulous looking Ontario leeks yesterday. I hope there are still a few bunches left!