summary: revisiting Ken Forkish’s Saturday White Bread recipe in “Flour Water Salt Yeast”; it turns out that ‘same day’ bread isn’t quite as flavourful as bread made with a preferment; (Click on image to see larger view and more photos)

Baking is a craft mastered only through years of trial and error, and recipes alone can take a baker only so far. I can’t emphasize enough how important it is to let yourself try and fail – it’s only flour and water and time. Remember, success is a poor teacher. 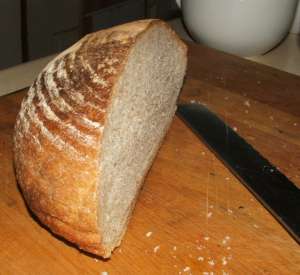 The other morning, we suddenly realized that we required bread. As it was Saturday, I decided to make Ken Forkish’s Saturday White Bread. After all, it was a decided success (even though it got a bit deflated in the barbecue) the other times that I made it.

Of course, I used our Brotform. And this time, because the weather was iffy, we baked the bread on a stone in the oven.

We were excited to try it in the oven because maybe, just maybe, it wouldn’t collapse because it would have room to expand instead of hitting a shelf in the barbecue or getting stuck to the brotform. Yes. I made sure that the brotform was really well floured and as a result, the fully risen loaf popped out perfectly.

As is my habit with any “white” bread, I added a little whole wheat flour to the all-purpose. So I was pleased to see that I had already been given permission by Forkish to do exactly that.

Sometimes I like to make this bread with 10 percent whole wheat flour for the round, earthy flavors it adds.

I added 20% whole wheat though.

Where IS that section?! Am I imagining it? I’ve scoured the book and can’t find it anywhere! I began to wonder if it might be in Maggie Glezer’s “Artisan Bread Baking”. Nope, I can’t find it there either.

Never mind… I’ll get back onto why I started droning here in the first place. It’s about the final flavour of the bread. I’ve known for quite a long time that the longer the rise, the more flavourful the bread. In fact, it is spelled out in “The Italian Baker”, the very first serious bread book I was given, way back in 2000. It is reiterated in every other bread book I have, including the latest addition to our shelves, “Flour Water Salt Yeast”.

□ The rule of thumb: The slower and longer the rise, the greater the flavor. […]
□ Dough with less water is more substantial and compact than softer, moister dough, which will need more mixing and kneading, and longer rising times.
□ Lower temperatures encourage the formation of acetic acids, which give breads a more aromatic taste.

[The Saturday White Bread] recipe is designed for someone who wants to make good, crusty loaves of white bread from start to finish in one day. […] Here you get the taste-good benefits of a medium-length fermentation, resulting in a versatile, delicious bread that’s great as a dinner bread […]

[Overnight White Bread] dough rises overnight, and the extended bulk fermentation gives it more time to develop complexity in its flavors than the two Saturday Breads (pages 81 and 85). […] This bread has many uses and won’t last long.

So, I don’t know why it came as such a big surprise that Forkish’s Saturday White Bread on page 81 was so much less flavourful than his White Bread with Poolish on page 98. 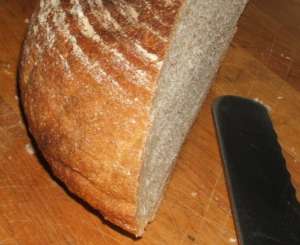 But it did. And it was much less flavourful.

Don’t get me wrong. The bread was still good. Really good. It just wasn’t quite as brilliant as the bread with pretty much exactly the same ingredients that had been made over two days instead of one.

Especially the next day. It was quite dull and almost stale tasting.

Having said that, I really should stress that this supposedly stale bread was still better than any storebought bread we’ve had.

I once heard Lionel Poilâne […] speak about being invited for dinner at a family’s home. The hostess set a basket of bread on the table and immediately apologized for it, saying she had made it herself and of course, it didn’t compare to his masterful loaves. But M. Poilâne said on the contrary, this bread was far better than anything he had ever sold, for she had made it to feed her family – with her own two hands and all her heart.

I bet you’ve already guessed what I’m going to do now! As soon as I hit “publish”, I’m headed to the kitchen to put together a preferment. I think, in honour of Carol Field, I’ll revisit one of the recipes in her book. Hmmm, which one, which one?

I know! Pane Pugliese – one of the first recipes I ever made from The Italian Baker. My pencil notes say that T gave the bread 10/10 and that he was swooning. Clearly, it’s high time that I made it again.