This is a spongy, mild-tasting vegetable that’s meaty yet low in calories. It’s never eaten raw, but it can be baked, grilled, or sauteed. The best eggplants are firm and shiny eggplants with unbroken skin. Male eggplants tend to have fewer seeds, and are therefore less bitter than female eggplants. To sex an eggplant, look at the indentation at bottom. If it’s deep and shaped like a dash, it’s a female. If it’s shallow and round, it’s a male. Smaller eggplants also tend to be less bitter. Freshness is important, so don’t store them for very long. 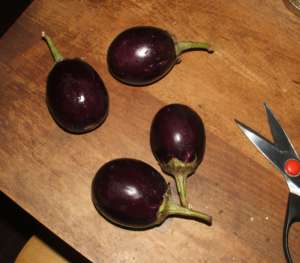 We usually get regular western-style or Asian eggplants – so often that we don’t have any photos of them – but these little fist-sized Indian eggplants looked so beautiful that we had to try them!

Suddenly, I understand why we call these vegetables “eggplants” instead of “aubergines”. They do look like eggs, don’t they?

We usually thinly slice eggplant, brush it with olive oil, sprinkle on a bit of turmeric and grill it on the barbecue. But I suddenly decided I wanted baba ganoushe.

And I completely forgot that we had made it before. Or a reasonable facsimile of it, anyway.

Eons ago, before I’d even started this blog, when Rachael Ray was still the darling of the Food network. At that time, we slightly modified her Poor Man’s Caviar to make Eggplant and Garlic Spread. And as I recall now, it was really good.

Or at least, I liked it.

For this time round, because I have no mind and can hardly remember what happened last week, let alone more than ten years ago, I looked in our copy of Aida Karaoglan’s lovely cookbook, Food for the Vegetarian: Traditional Lebanese Recipes and saw that she suggests adding tahini, lemon juice and crushed raw garlic and pomegranate seeds if you have them.

We do have anardana (dried pomegranate seeds) but I’m lazy and didn’t feel like grinding them. So we decided we’d use sumac if we wanted that flavour.

We tossed the little eggplants directly onto the grill of the barbecue and waited until the skin was charred and had split.

Silly us. We really should have followed Karaoglan AND Ray’s instructions to pierce the skins first. Our unpierced eggplants had a lovely smokey flavour but they were just a little bit on the watery side.

I’m not the biggest fan of tahini. Don’t get me wrong. I do like it. But it does take over. So I was adamant that we would add only the tiniest trace. We stirred some in with one crushed garlic clove and tasted it. Dull. Really dull. And watery.

We added more tahini and another clove of garlic and a bit more salt. And some olive oil.

It tasted okay. More than okay. It was good – even if a bit watery – and had just a little hint of smokiness from being cooked in the barbecue at the same time as T was smoking some rosemary covered chicken (remind me to rave about that chicken!!) 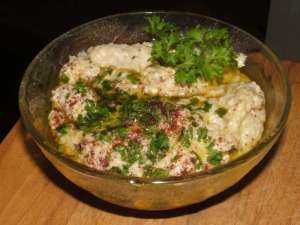 But it really looked a bit unappetizing. So we garnished it with sumac and parsley from the garden. It looked A LOT better.

Next time, I will pierce the skins of the eggplants. I will also roast the garlic first before adding it. Raw garlic is a little too sharp tasting and takes over from the delicate flavour of the eggplant. I might even add some allspice, as Rachael Ray suggests. Then again, I might not.

Rice Crackers I adore these crackers. When I was a teenager, we always had them in the house because Dad had to be on a gluten-free diet. (Think that’s hard to manage now? Try it in the 1970s!) Now, I always have a box on hand. Being an ingredients reader (because of Dad), I was really disheartened to see the following:

What?? I’m almost positive that in the 1970s, these crackers contained “rice, starch, water, salt”. I don’t think there was sugar. Or maltodextrin (whatever that is). Or oil. Was there??

And I am decidedly positive that the starch was rice starch. I know THAT because Dad phoned the company in Japan to find out. (Remind me to tell you that amazing story.)

But “may contain wheat”?? How annoying is this? It has been my habit to take rice crackers whenever I have to bring snacks for a largish crowd. Because I know that there is an increasing number of people who cannot tolerate wheat. And, because of Dad, I also know how sad it is to be unable to eat just about everything on a Pot Luck table.

Parsley Don’t even get me started on our parsley in the garden!

I cannot believe how non-lush our parsley is! I have put it into its very own “rich soil” pot on the balcony. I know it’s not getting nearly the amount of sun that it wants in our most shady garden. But for Heaven’s sake! If basil and chilis can thrive, why can’t parsley? After cutting the parsley for the baba ganoushe, there were only a few meager stalks left. Waaaahhhh!! I keep thinking of the stunning border of parsley around a large flower bed at the horticultural school in Niagara. 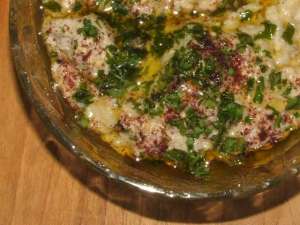