recipe: Sautéed Brussels Sprout Leaves with bacon and garlic (based on a recipe of Laura Calder’s) 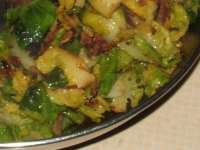 These are Brussels Sprouts; just the leaves!

Ha. Isn’t it amazing how these things suddenly appear? A couple of days after we made these brussel sprouts, Alanna (A Veggie Venture) posted about brussels sprout leaves with lemon.

It had never occurred to us to use just the leaves until seeing Laura Calder’s “French Food at Home” Food TV (Canada) show. She sauteed her leaves with chopped bacon and seasoned with salt and pepper. We tried it that night and it was fabulous.

And Alanna is right. It IS time consuming. It’s much easier to cut x’s into whole sprouts, parboil them and then sauté them with breadcrumbs*. But this way without the breadcrumbs is easily as satisfying to eat. 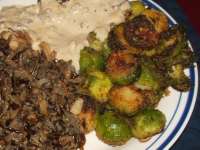 * I’m amazed to see that I haven’t posted any photos of Brussels Sprouts before this! We absolutely adore them and have had them that way often!

edit 16 February 2008: I KNEW I had taken pictures of the other way to prepare Brussels sprouts! I found some in my 2006 files.

Even though Laura Calder says in her cookbook to discard the inner core (although I see she does give the option on the FoodTV recipe to thinly slice the cores), we did NOT discard the central part of parts of leaves that were impossible to separate. Instead, we quartered them and tossed them into the pan along with the leaves. (Next time we want to have sautéed brussels sprout leaves, we’ll get brussels sprouts that are more open.)

The leaves were beautifully cooked in about 5 or 10 minutes.

Sorry, no measurements; you’ll have to wing it

recipes from OUR kitchen – index 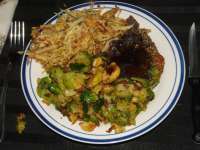 Did I mention that brussels sprouts done this way are fabulous?

Since getting the new DVD player/recorder, we have been really enjoying NOT watching Paula Deen or Rachael Ray on the Food Network. (Quel relief. One can only stare in amazement/horror for so long.)

In the new shows that we suddenly have access to, we’ve discovered Laura Calder. She’s just a tiny bit goofy but she knows what she’s doing in the kitchen and she has a sense of humour. I particularly like that she often stirs or whisks by hand. She also uses tea towels or lids to cover things. Instead of ripping off huge expanses of plastic or foil to be used only once.

Laura Calder’s cookbook French Food at Home is also terrific. We got it out of the library but I think we will have to buy our own copy.

Ah, garlic. There are very few times that garlic is not featured as a flavouring in at least one of our dishes. And I am constantly amazed that garlic was considered an exotic ingredient in my family until my late teens.

Onions or chives, and not too many please, were the alliums of choice. Shallots? What are those?!?! Occasionally, Mom and Dad would open a jar of horseradish. Of course, I turned my nose up at that. Tooooooo strong!!

For eons, on a top shelf, we had a little cardboard box with one head of garlic (minus one or two cloves). I don’t remember seeing my mom remove the cloves but she must have – for the annual dinner party my parents hosted. A dinner party that we children were NOT invited to but got to watch being prepared. As I recall, the first time I saw broccoli was when Mom made “Chicken Divan” and the first time I tasted tarragon (dried) was when she made “veal birds”. We were so excited that we got to taste a “veal bird”. (And from that moment, I was in love with tarragon.) And whenever Mom and Dad went out to dinner to celebrate their anniversary, they would come home reeking of garlic, raving about the fantastic dinner they had had. (Of course, now, I wouldn’t notice. Undoubtedly, I always reek of garlic.

And on the same token, I do not recall when garlic became standard fare in my parents’ kitchen – along with broccoli and tarragon (fresh if we could get it).

As far as I can think, we have never (will never) run out of garlic in our house. One of the things I really like about it is that garlic’s not only good but apparently good for us too.

Garlic […] has a long reputation in folk medicine and mythology for its health giving properties. Some of these – such as its antibiotic properties – have been confirmed by modern science, others remain open to question. Can it really help with conditions such as high blood pressure and even toothache? […] when it comes to cooking there’s really no substitute for the original stinking rose.

Historically, garlic has been used around the world to treat many conditions, including hypertension, infections, and snakebites, and some cultures have used it to ward off evil spirits. Currently, garlic is used for reducing cholesterol levels and cardiovascular risk, as well as for its antineoplastic and antimicrobial properties.

I have not had the greatest success growing garlic (our tiny garden is semi-shady to deeply shady) but I find it rather disturbing that this winter’s supermarket garlic comes all the way from China. As I was wandering around in “Plants for a Future”, I was excited to see Canadian garlic. It sounds like exactly (as long as I remember to water the back garden in the dog days of summer. …if all this snow ever melts and we do get summer ever again :lalala:) the one for us!

The plant prefers light (sandy) and medium (loamy) soils. The plant prefers acid, neutral and basic (alkaline) soils. It can grow in semi-shade (light woodland) or no shade. It requires moist or wet soil.

edit 18 February 2008: Erin has posted the roundup. Take a look at all the wonderful entries!