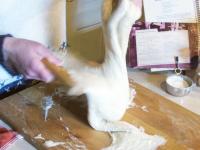 This morning, I was thinking about the half cake of fresh yeast in the fridge and suddenly decided I neeeeeeeeeded (no pun intended) to make my alma mater‘s Tuck Shop Cinnamon Buns.

Tuck shop cinnamon buns were legendary when I was going to school. They were, to put it mildly, fantastic. I have two slightly different versions of the recipe. One is in A Taste of the Arts published in 1982 by the Edmonton Arts Cookbook Society as a fundraiser. The other I snipped out of the alumni magazine, New Trail (no idea what year it was republished) but it is the same as the one online.

Because I’m so experienced at bread making (cough), I imagine that I know everything there is to know about it. So I altered the recipe by using milk and water instead of just water and only one egg instead of two. And I used demerara sugar instead of white sugar for the coating for the buns. And butter rather than margarine – of course!! Why would I torment us by using margarine?? (Bleah) And then to make up for the missing egg, I added an extra ¼ cup of water. Can you say “slack dough”? Can you say “scrambled eggs”??!

Amazingly, while I was kneading, I did manage to keep the dough on the board and off the floor – only a little stayed on my sleeves that irritatingly wouldn’t stay rolled up. I kept pushing at them with the cleanest (ha) part of my hands that were covered in sticky dough. Granted, the Taste of the Arts version does say

N.B. This is a very sticky dough, but do not add extra flour as it spoils the buns.

Well, they aren’t kidding!! Very sticky it is. I’m afraid I DID add a little extra flour. And then when it came time to shaping the buns, I was really in a jam. (I didn’t really read the instructions properly. I know everything, remember?) I noticed AFTER I happily poured melted butter into the sugar and cinnamon mixture that I was supposed to have two separate bowls – one of melted butter and one of cinnamon and sugar.

I poured the risen dough out onto the board and cut (ha!) it into four pieces with the intention of continuing on to cut it into twelve pieces. There was NO way that I had pieces the size of an orange (what kind of orange, I might ask….) They were puddles of dough that oozed back into each other. So as best I could, I spread out a quarter of the dough into a rectangle and then smeared butter/sugar/cinnamon sludge on top of that. (My sleeves!! sticky dough AND buttery sugar on them now…) And using the dough scraper, I rolled the thing like a jelly roll and cut it in three. Oh yes, and I added a few raisins because we like raisins in cinnamon buns. 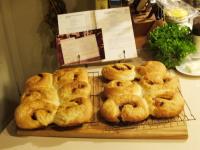 I just took them out of the oven. I have to say they look pretty good. Even though they’re on the flat side. And maybe a bit big. I’ll take a picture…

Oooh!! Even though I have a LOT to learn about taking pictures, I’d say they look good enough to eat, don’t you think? Once they’ve cooled, I’ll let you know if they are.

I realize that the colour and quality of these photos isn’t the best but I was so excited that I haven’t taken the time to photoshop them. (The kneading picture is a bit too purple and the baked buns are rather dark.)
edit 15 January 2006 @ 08:28 EST:

I added a few more photos of the kneading to the larger images page (click on the kneading image to see) I also lightened the photos a little to reflect the actual colours a little better.

Oh yes, and the taste? Well, not exactly Tuck Shop Buns but stellar nonetheless. Now I’m torn. Shall I make this variation again or should I try actually following the directions to make the Tuck Shop version?

edit April 2007: Here is our version of Cinnamon Buns
based on University of Alberta Tuck Shop Buns