summary: delving into the archives; recipe for onion and leek lasagne; mushroom lasagne; squash ravioli; getting inspiration by re-reading back-issues of SAVEUR Magazine;

I was looking through our photo archives the other day, and realized that I had neglected to rave about the lasagne that T made in January!

Spelled with an “e” — lasagne — in Italy, this is a dish that has traveled very well across the Atlantic. […] There are scores of variations on this layered pasta dish, the most famous being from Bologna, where a besciamella sauce is used instead of tomato.

– John and Galina Mariani, The Italian-American Cookbook: A Feast of Food from a Great American Cooking Tradition, p.177 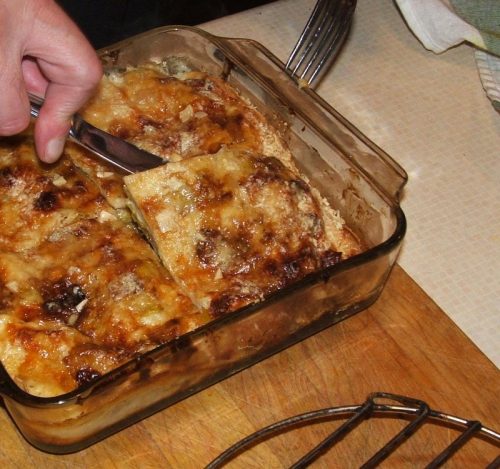 This past Christmas, inspired by reading a past issue of SAVEUR Magazine (which one was it???), T ordered a copy of “The Italian-American Cookbook” by John and Galina Mariana to give to me for Christmas. Leafing through the book on Boxing Day, I couldn’t help paying close attention to the recipe for onion lasagna on page 178.

This lasagna, adapted from Cucina Simpatica (HarperCollins), is probably the most luxurious we’ve ever tasted.

– John and Galina Mariani, The Italian-American Cookbook: A Feast of Food from a Great American Cooking Tradition, p.178

Really, how could we not make this recipe after reading the intoxicating words, “most luxurious”?

In early January, after the major Christmas feasting was done, we made sure we had leeks. And T waltzed into the kitchen to make fresh pasta and bechamel sauce for this fabulous dish. 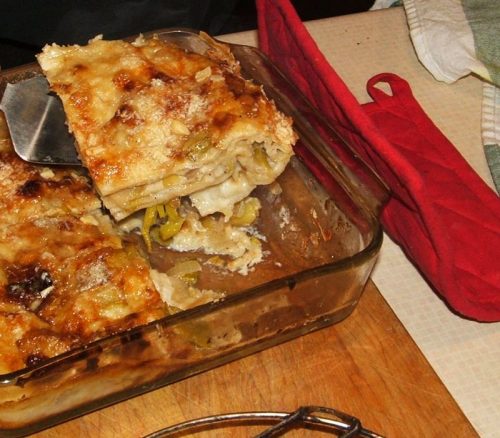 Here is what T did:

Fresh Pasta: Many grocery stores carry packages of sheets of fresh pasta in their refrigerated sections. This pasta is okay, of course. But home-made is WAY better. Here is our recipe for making fresh pasta, using a half cup semolina flour, a quarter cup 100% whole wheat flour, and a quarter cup all-purpose flour for every egg. [For fresh pasta], the total amount of flour should work out to 1 cup for every egg.

Filling: Just onions and leeks are decidedly delicious. The combination of mushrooms, toasted walnuts and bechamel is also fabulous. But we think for next time, we would add layers of par-cooked spinach as well.
“Par-cooked” Spinach: Wash fresh spinach well. Put the still dripping washed spinach into a colander and sprinkle liberally with salt. Toss to cover the leaves with salt and let sit for about 20 minutes. After the spinach has wilted, squeeze it out well with your hands (it’s easier to do this in batches). Rinse with water and squeeze some more. Set aside in a small bowl. This keeps well for a week or so in the fridge.

Béchamel: It’s true; I’m lazy. Of course, I could write down exactly what Mum always did to make basic white sauce – when did I even know that this was called béchamel? Whenever Mum made cheese sauce for macaroni and cheese (no KD for us when we were growing up!) she started by making a simple white sauce. However, Mum’s measurements involved the words “some of” and “enough” and “oh, I don’t know – just what seems right”. Happily, Laura Calder has done an admirable job of describing how to make Basic Béchamel Sauce for the Food Network, saying:
For thick béchamel, use ratio of 2 tablespoons butter + 2 tablespoons flour for 1 cup/250 ml milk.

We loved the “lasagna” so much that not long after, T made it again. But this time, we decided to add toasted walnuts and mushrooms. 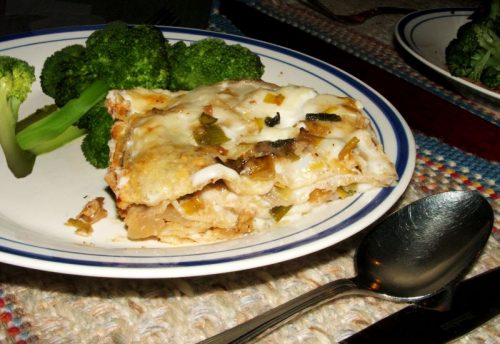 If we had had a squash, we probably would have made squash and walnut lasagne. Because these squash ravioli with spinach, pecans, and bacon we made last November were so amazingly fabulous. (We used the dumpling press that my sister gave us to make the ravioli.)

And look! I had forgotten how long we were still able to harvest nasturtiums from the garden! This photo was taken on 5 November 2019! 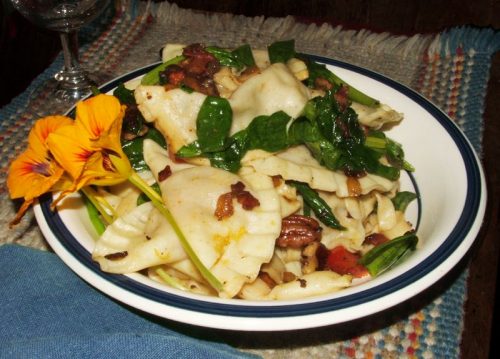 I tried to find exactly which past issue of SAVEUR Magazine T was reading last October. To leaf through each one of our issues (almost 20 years worth) is an almost impossible task.

All I remember is that the reviewers said that The Italian-American Cookbook was THE cookbook to have for recipes that we associate with Italian food here in North America.

Searching SAVEUR’s website is no help at all. For some unknown reason, they have decided not to state which issue any of their online material was originally in. Why?! 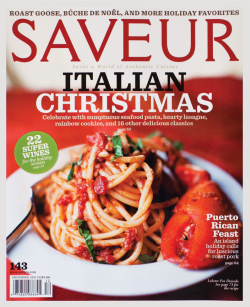 After searching on the SAVEUR site, the only mention of John Mariani is his November 2011 article “Italian America”. Searching through the 2011 issues on our bookshelf, I discovered that the several page article (with lots of lovely photos) is in the SAVEUR “Italian Christmas” No. 143 issue.

At my family’s home in the Bronx, we ate slices of fresh, milky mozzarella with seeded bread from the Italian bakery down the block, macaroni shells stuffed with Polly-O ricotta, lasagne with little meatballs between the layers, baked rigatoni, eggplant parmigiana, chicken cacciatore, beef braciola. We drank chianti that came in a straw-covered flask and espresso from a drip pot, with a sliver of lemon peel. This was the 1950s and ’60s, and though Mom was always cooking for our family and friends, Dad knew his way around the kitchen, too. He took to the stove on weekends, concentrating on a single dish: lobster fra diavolo, because my mother hated handling live lobsters.
We thought we were eating authentic Italian food, because the dishes were the same ones all the other Italian families we knew cooked and ate. But in reality, our cuisine was an American invention: an amalgam of hearty, rustic dishes brought here, primarily by southern Italian immigrants (my grandparents came from Abruzzo and Campania), then adapted and embellished upon in American kitchens. By the time I started writing about food in the mid 1970s, this homegrown cuisine had fallen out of favor as northern Italian—inspired dishes, deemed (sometimes erroneously) lighter and more authentic, became all the rage. I can’t say that I didn’t welcome the new trend of delicate fresh egg pasta, or celebrate the fact that grilled branzino had replaced shrimp scampi on so many Italian menus. But I will never deny my love for a supersize plate of spaghetti with homemade meatballs, or an eggplant parmesan hero, with its ample breading and sauce and molten mozzarella. There’s a beauty and succor to Italian-American food, and it’s for a good reason that so many chefs have been returning to those classics recently, preparing them with a newfound zeal and sense of respect.

– John Mariani, SAVEUR Magazine No.143, Italian America, p.56
I recently went down to Mike’s Deli on Arthur Avenue in the Bronx to bone up on my sausage-and-peppers lore. “In Naples they use the hot fennel sausage with melted mozzarella and tomato sauce,” said the deli’s owner, David Greco. “North of Naples, no sauce, and they used more sweet sausage.” It goes without saying that the most conventional and delicious way to eat the food is in a length of crusty Italian bread. I bit into both versions, wholly undecided as to which was better, but as I sipped a sweet red wine from a glass tumbler, it didn’t seem to matter much. I just thought about how I was going to finish both.

Midnight Lasagna is not a recipe or the title of an Italian movie. It is a term that describes the phenomenon of eating lasagna cold out of the refrigerator late at night. This occurs principally, but not exclusively, after the lasagna was served at an early afternoon family gathering, then stored in the refrigerator for the next day.

– John and Galina Mariani, The Italian-American Cookbook: A Feast of Food from a Great American Cooking Tradition, p.179

edit 10 May 2020: Look! I found it!! (No thanks to SAVEUR’s website though….) I got a sort-of clue to where it was by Googling images with the terms "saveur magazine" italian-american cookbook and looked through any of the issues pictured in the results: specifically, No.120, No.146, No.148. I TRIED to look through No.49. But I couldn’t find it on our shelves!! (oh oh) On an offchance, I looked at No.50. And there was the book review!

I find it really interesting that the photograph of the cookbook in the magazine is a trade paperback rather that hard cover. It just shows that the people who take the photos don’t necessarily read the articles…. 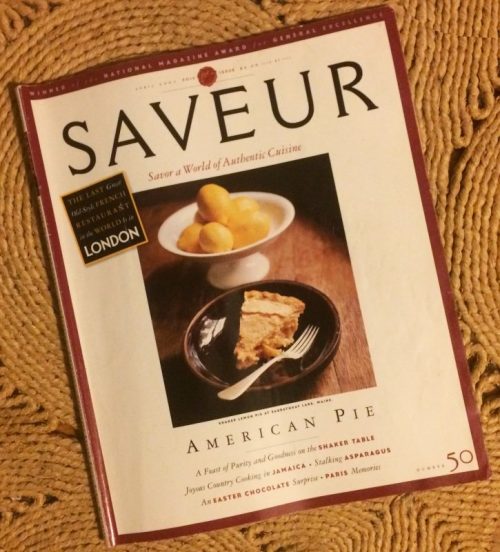 One measure of how good a cookbook is is how bad it looks ten years down the road. Splatter stains, split corners, scribbled marginalia, pages gone wavy and stiff from spills — such are the the scars of lasting love. So get the hardback of this one. You’ll want to put some miles on it.
[…] The Italian-American Cookbook is more than a cookbook with a future of heavy use. It is also an affectionate photo album of Italian-American icons — church ladies cleaning calamari, a pizzaiolo spinning his dough, Sophia Loren in a skin-tight tank top (“Everything you see I owe to spaghetti”). […] It is a cultural history. It is a celebration of people and tastes too many of us once learned unconsciously to mock. It is altogether delightful. 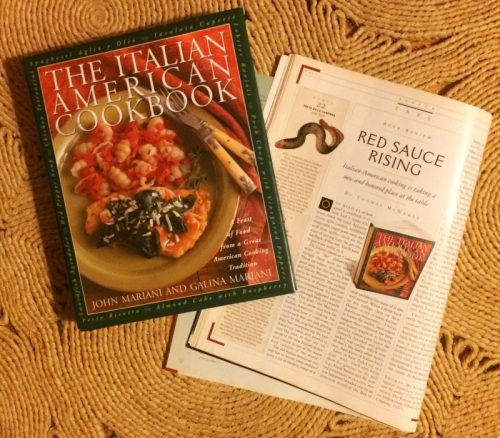