summary: recipe for onion and poppy seed bialys, based on a recipe in “The Bread Bible” by Rose Levy Beranbaum; submission for Bookmarked Recipes, YeastSpotting and Bake Your Own Bread; (click on images to see larger views and more photos)

Am I a bagel or a bialy person? …the jury is still out. 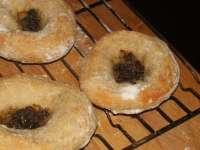 For years, I’ve vowed that I would make bialys. I was first aware of them in 2001, when I was given “Artisan Baking in America” by Maggie Glezer. Every time I open up her book to get to our favourite “Acme’s Rustic Baguettes” recipe, I gaze at the beautiful photos of Kossar’s bialys all stacked up and golden.

When I was growing up in Milwaukee, one was either a bagel or a bialy person; I was the latter. During the week, I loved toasted and well-buttered bialys for breakfast. I still remember my precise bialy-eating ritual: I would eat the thicker bottom half first, taking care to circumvent the oniony central crater. Then I would eat the thinner, bubblier top half, which often had some onion flavor carried over from the center. finallly I got to the crater where, if I was lucky, a pool of melted butter would remain. This last bit was thoroughly delicious, and its memory carried me in the cold, dark bus ride to school.

The first time I saw Glezer’s bialys, I got distracted into making bagels instead. Because j’adore bagels and at that time, I was definitely in the bagel camp. And then, typically, I forgot about bialys.

Until I read about fellow BBBabe Natashya’s bialys and vowed to make them as soon as I was home for the day.

Then I read about bialys in Rose Levy Beranbaum’s “Bread Bible” but got distracted by her bagels. I was still firmly in the bagel camp….

Then I read about onions in Dana Bowen’s article Roots of Flavor: The Versatile, Inspiring Onion in SAVEUR magazine and saw the bialys recipe at the end of the article, I vowed again to make them as soon as I got home. And forgot. Again.

Until the other day. One of our friends brought us a bag of organic onions from their farm. She said they just couldn’t finish eating them all. They are stunningly beautiful and look as if they were picked last week.

Ha. It just goes to show you how long the onions we buy must languish in warehouses before we see them!

And I thought about the fact that we really should show the onions off. What better way than with onion bialys?

There are some who divide the world between bagel lovers and bialy lovers […] This simple and amazing bread, spread with butter is a soul-satisfying as bread ever gets. […]

Kossar’s, on the lower east side of New York, is close to Greenwich Village, where I live, and even closer to where my great-grandparents lived years before I was born. Kossar’s is considered by New Yorkers to be the last word in biialys, so I was delighted when Whitey, one of the top bakers, who has worked there for twenty five years, offered to give me a lesson in making and shaping bialy dough. […]

Allow the bialys to rise […] until almost doubled; when pressed lightly in the center, they should keep the impression. If the dough is underrisen, it will puff up in the center instead of maintaing the characteristic hollow crater. The trick for underrisen dough is to make a small hole in the center before adding the filling.

I deliberated. Should I use Maggie Glezer’s recipe or Rose Levy Beranbaum’s recipe? Both are from Kossar’s. I looked at the recipes and the ingredients appeared to be identical.

The biggest differences are that Glezer makes twice as many bialys as Beranbaum and uses a food processor to mix the dough. Glezer says that she puts her onions into her food processor first and then, without washing out the processor’s bowl, she mixes the dough to give it a hint of onion flavour.

Because I planned to hand-mix the bialy dough, make only 6 bialys and use a knife to chop the onion, I opted to use Beranbaum’s recipe. I didn’t think it would make any difference.

1.) Water: Tap water is fine to use – just make sure that it has stood for at least 12 hours so that the chlorine has dissipated. Under no circumstances should you use water from the hot water tap. Of course, saying that it is unsafe to use water from the hot water tap might be an urban myth, but why tempt fate? Heat the water in a kettle or microwave and add cold water until it is the correct temperature, (use the baby bottle test on the back of your wrist – your fingers have no idea of temperature!) Or you can use a thermometer. The temperature should be BELOW 120F because yeast begins to die when the temperature is higher than 120F.

3.) Yeast: This time round, I used instant yeast (because that’s what we happen to have in the fridge). If it were active dry, I’d probably use the same amount.

3.) Flour: Like bagels, bialys call for strong flour. Unbleached bread flour is no longer easily obtainable (stupid demographic studies, profit margins and share holders wanting ever higher returns). We buy high gluten flour (sometimes called “vital wheat gluten” from the health food store and add it to our unbleached all-purpose flour. Rather than following the allrecipes.com formula of adding a teaspoon of vital wheat gluten to each cup of flour, I used Susan’s percentages to calculate how much high gluten flour to add.

I found that replacing the high-gluten flour in my usual sourdough bagel recipe with a mixture of 97% flour (the regular flour I use for bread) and 3% vital wheat gluten gave me a bagel that was virtually indistinguishable from the original.

4.) Salt: Salt: I didn’t notice until we tasted the bialys that Beranbaum calls for 6.6gm of salt and Glezer calls for just 6 gm of salt for the same amount of flour. If there is not enough salt, the bread may not brown enough; the reverse is true as well: if there is too much salt, the bread may turn out too brown or red. While these bialys were on the blonde side, I still say “too much salt”. Next time, I’ll put in 6 gm as Glezer suggests. And I may omit the salt from the onion mixture entirely.

Salt indirectly contributes to crust coloring. This attribute is a result of the salt’s characteristic of retarding fermentation. Starch in the flour is converted into simple sugars […] Since the salt is slowing the rate of the sugar consumption, more of what is known as residual sugar is available at the time of the bake for crust coloration.

Typically the amount of salt in a dough is between 1.8 and 2 percent of the amount of flour, by weight. If there is a large proportion of other ingredients, such as seeds, for which salt also enhances flavor, the percentage of salt could be a little higher.

-Susan, Wild Yeast, Wild Yeast: Worth Its Salt – The Role of Salt in Bread

5. Baking Beranbaum suggests using a much hotter oven temperature. Our oven is ancient and we really have no idea what the temperature is in there. We think that when it’s set to 400F, it’s much hotter….

N.B. If you wish to serve warm bialys, reheat them after they have cooled completely. They are still baking when they first come out of the oven! To reheat any UNsliced bread, turn the oven to 500F for 5 minutes or so. Turn the oven OFF. Put the bread in the hot oven for ten minutes.

We had bialys for breakfast. They were delicious! I loved how chewy they were. But not too chewy.

But. They were salty. Almost too salty.

So, I checked to see that I had got the measurements right. Yup. I did. Beranbaum calls for 6.6gm salt (that I measured with my nifty little scale that measures in fractions of grams). Glezer (for twice the amount of flour) calls for 12gm of salt. Phooey. So much for my reading abilities….

Still, the bialys were really good. We’ll definitely have them again. We ate them with LOTS of butter that melted beautifully on the insanely hot bialys that we had reheated for several minutes in the toaster oven.

Why did we leave them in the toaster over for so long? T kept pointing at the photo of bialys in Glezer’s books and saying that they were much darker than ours. I kept reading the baking instructions in both books:

Preheat the oven to 475°F (240°C) […] Slide the parchment onto the hot stone and bake the bialys until just spotted brown, 6 to 8 minutes

Preheat the oven to 475°F […] Place the baking sheet with the bialys directly on the hot oven stone […] Bake for 6 to 10 minutes or until pale golden and mottled with brown spots (an instant-read thermometer inserted into the center will read about 211°F).

Okay okay. I admit it. (Shhhhh, don’t let T know that he’s right. His head will explode.) I should have let the oven preheat for longer AND left the bialys in for another 5 minutes or so – until they were nicely golden instead of just barely tinged with gold.

My excuse was that it was late and I wanted to go and watch a movie instead of hang around in the kitchen.

But even though our bialys might not have been quite as golden as is ideal, I still loved them. I haven’t decided whether I love them more than bagels. It’s close. Really close.

One thing is certain. Because no par-boiling is required, bialys ARE easier to make than bagels.

But I just can’t decide. Hmmmm, maybe I should test by having another bialy. 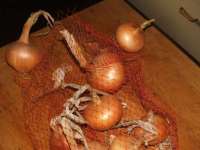 Hmmmm, how shall we show off the rest of these beautiful onions?

SAVEUR magazine has a number of recommendations. Which one(s) should we choose?

Oh oh. I hope we have enough onions! 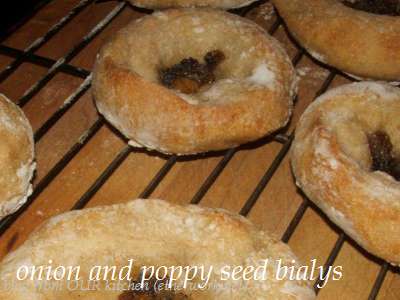