summary: recipe for Moroccan Semolina Bread baked on the barbecue; based on the recipe for Marrakech Tagine Bread in “Food of Morocco” by Paula Wolfert; submission for YeastSpotting and Bake Your Own Bread; Whoohooo! Our lovage is flowering! (click on images to see larger views and more photos) 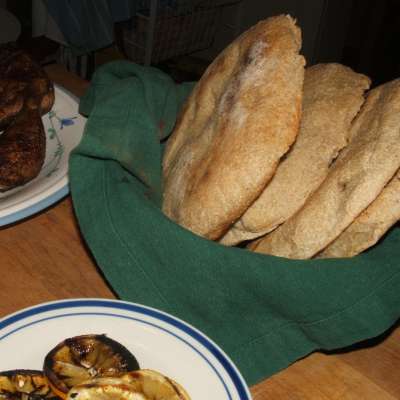 Not long ago, Tanna (My Kitchen in Half Cups) reviewed Paula Wolfert’s cookbook “The Food of Morocco” on goodreads.com:

An incredible bread chapter! […] The chapter on salads redefines salad!

-Tanna, review of “The Food of Morocco” by Paula Wolfert, goodreads.com

Intrigued, I immediately got the book out of the library. I love the description of “knuckling” on the ‘Bread with Sesame and Anise Seeds’ on page 102. For that page alone, the book is a keeper!

Years ago, Moroccan women […] often used a method called “knuckling” to add additional water to dough that was already saturated: the cook simply dips her knuckles into warm water, then uses them to press down on the dough while gradually working in the water.[…] When the cook hears squishy sounds, she knows she’s doing it right. If the dough gets too wet, she simply switches to an ordinary kneading motion, which tightens the dough, or adds a little low-gluten flour and knuckles in a few more drops of water to loosen the dough again.

-Paula Wolfert, Bread with Sesame and Anise Seeds, “The Food of Morocco”

I meant to try knuckling with the Marrakech Tagine Bread. But (here’s a big surprise…) I forgot.

In retrospect, I’m kind of glad that I didn’t do the knuckling. There is quite a lot of Semolina flour in this bread. We get our Semolina flour in India Town, where it is labelled fine grain Sooji. It is quite grainy, however, and as I was kneading the bread, every time I kneaded and turned the dough a quarter turn round, about 5 minutes in (when the dough wasn’t even close to being smooth) my thumbs started to tingle from being sanded. I’m not sure how happy I’d be to have sanded knuckles.

But the dough did finally become nice and soft and produced really good bread. When it rose, it honeycombed beautifully (nope, no photo…) with long long strands of gluten. 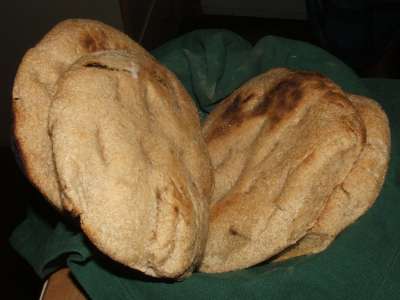 Here’s what I did to make this bread:

Serve immediately with grilled meat ², a tagine or fuhl. Wolfert says the bread is also wonderful slathered with butter and drizzled with honey.

1.) Water: Wolfert calls for using an electric mixer and to “slowly add lukewarm water and the olive oil […] until the dough is silky smooth and slightly sticky“. That just seemed like too much work. Hence my method of dumping everything in together… (it still might have been fun to try the knuckling though.)

2.) What to serve: Paula Wolfert calls this bread “Tagine Bread”. I wanted to have it with Moroccan Chicken with olives and preserved lemons (that Anissa Helou suggests serving good crusty bread). But as barbecue season has just begun, we had the bread with grilled chicken (rubbed with ras-el hanout), grilled lemons, olives and steamed broccoli. We dipped the bread in oil. The next day, we heated up left-over bread and had it with fuhl. 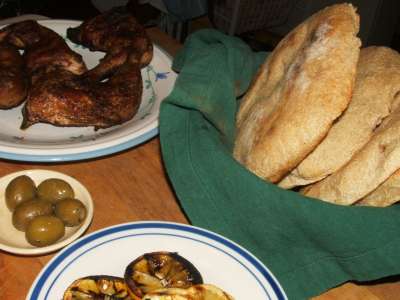 The bread has quite a soft and tender crumb – but still nicely grainy from the semolina. And of course, the outer crust was wonderfully crisp and chewy. It was particularly good dipped into oil and I can well imagine that it would be fabulous with tagine.

We had planned to serve preserved lemons with the dinner but had forgotten that we’d used them all up. So we decided to try grilling lemon slices. They were quite a revelation. They look beautiful AND while they aren’t quite as soft tasting as preserved lemons, they are almost as satisfying. Next time, though, we’ll drizzle them with a little olive oil just before serving. 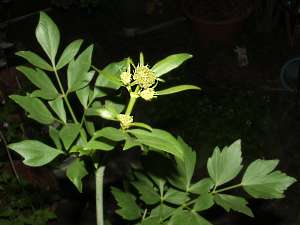 While we were waiting for the bread to finish baking, I noticed that our lovage is just beginning to flower. This is quite thrilling! Last year, we tried unsuccessfully to grow lovage from seed. It sprouted but refused to grow.

I was bemoaning the fact to a colleague last October and she very kindly dug up a huge clump of her lovage and brought it to work the next day. As soon as I got home, I divided the lovage mass into two and immediately planted it in two separate places in our tiny shady garden: one clump in the ground and one clump in a large pot by the side of the house. And then started biting my nails. It was already quite cold. The ground wasn’t quite frozen yet but it did seem rather late to be doing any trans-planting. So we were ecstatic when both clumps sprouted and flourished early this spring. (Too bad I didn’t take photos in April!!)

We’re so excited to have our own lovage at last. We use it in place of celery when making stock. It adds virtually the same flavour with the added advantage that we no longer have to find limp grey green former celery in the “crisper” drawer of the fridge.

I wonder what this bread would be like if it were not pressed down and forked to become flat just before being baked….