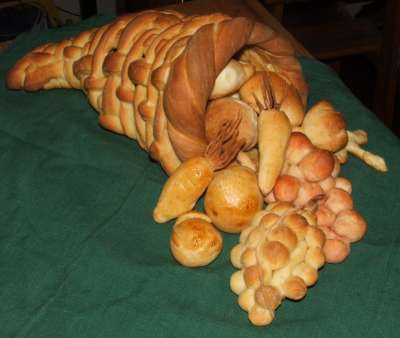 Yup. The Babes are crazy. We’ve made bread without flour and ridiculously slack bread. And for November’s task, set by Susan, we were to make decorative bread that wasn’t really intended to be eaten.

How could I, a child of people who had been children during the great depression make something edible that is designed to be merely looked at? And not eaten! It just goes against the grain (no pun intended).

And then once I looked at the ingredients list and saw butter and milk powder and reasonable portions of other ingredients, as well as the instruction that the left-over dough could be used to make bread sticks or buns, I wondered why we weren’t supposed to eat the cornucopia.

So I decided I’d make a little cornucopia to fulfill the November Babe task, just in case it wasn’t edible. And I’d make LOTS of things to spill out of the small basket. Then it would really be a horn of plenty! I even purchased a small stainless steel cup to use as a form.

My sister was already coming over on Monday to spend the day making Vina Terta; just a day before the deadline for making cornucopia. I told her I’d be making it after we finished together and she got very excited and begged to help. How could I say no?

She was thrilled and kept babbling happily about the grapes she wanted to make to fill the cornucopia. I would NEVER have thought of filling it with grapes! I was just going to make little buns to be spilling out.

We mixed and kneaded the dough for the cornucopia and made the vínarterta and had lunch.

Once we’d finished baking the cake, the cornucopia dough was almost doubled and we started putting things together for shaping it.

she: That’s WAY too small!!

me: Really? I think it’s fine.

she: But there’s no way that the grapes will fit.

me: Sure they will. Cornucopias are supposed to be too small for all the stuff going into them.

Of course, you know who prevailed here, don’t you?

I rummaged around through various cupboards and found a larger steel cup – the kind used for making milk shakes. My sister still thought it too was too small but finally conceded reluctantly that it would have to do.

I covered the cup with parchment paper. Susan suggest oiling the form but because I know everything there is about everything,

I made an executive decision that oiling was unnecessary. And we started molding the dough.

I made a 4 strand braid and looped it around the mouth of the cup.

me: No. 2 strand will be better. [disentangling 4 strands and turning the rope into a 2 strand rope] 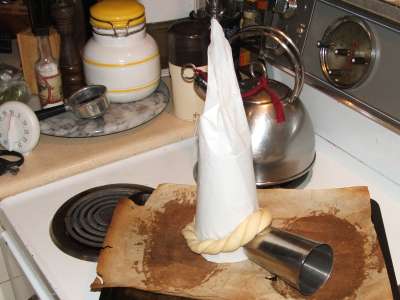 After some argument about the placement of the ring on the cup – whether it should be flush with the edge or at an angle, once again, I bowed to my sister’s superior judgement to make a wider mouth for the basket.

Then we started to make single strand rings to stack up on top of the double strand lip.

me: I think it will look great.

me: one of the other Babes wove her dough (see Lien’s fabulous cornucopia)

she: No… that’s too ordinary too. Let’s make a lattice.

me: [reluctantly] okay…. if it doesn’t work, we can always scrap it and start over.

We made the lattice. Naturally, because we didn’t actually measure anything first, it was only large enough to cover half the cup. And getting it onto the cup was a whole other interesting -+cough+- exercise. (Thank goodness for our superpeel!)

We made a second lattice and laid it down under the cup then joined the horizontal strips as best we could. Near the top, we wove strips into the leftover long pieces, then munged them all together into a curvy point.

Ha!! It looked a little messy but hey! We thought it might just work. And into the oven it went.

We immediately began to form the filling for the cornucopia. I was just planning to make little buns but B really wanted to make grapes. When I saw her grapes, of course, I made grapes too. And then I saw that she had made some plums. “Monkey see, monkey do”. I made a couple of pears. She made some carrots. And then she took a piece of dough and started pinching it together – WHAT IS THAT???

me: Is that garlic?

me: Hmmm. I guess. But it looks like garlic….

We decided (okay… my sister insisted and I agreed that she was right again) that we should glaze some of the fruit. We used milk wash, apricot jam or beet pickle juice (remind me to rave about the beet pickles I made after reading fellow Babe, Katie’s recipe!!)

After about 25 minutes, the fruits were ready to go in the oven. We took the cornucopia out of the oven to see that it was a beautiful golden brown. It looked done. I was sure it was done.

Naturally, I had forgotten to read in Susan’s recipe that the form was to be removed half way through the baking. But luckily my sister was there and knew intuitively that the bread on the inside was not yet baked. She said we had to remove the form.

We were a little concerned that it might break the basket but happily, the form slipped out very easily. (Isn’t parchment paper great?) We then covered the basket with aluminum foil tent (ha!! I remembered reading that part) and put the basket back in the oven to continue baking so the inside would get done. 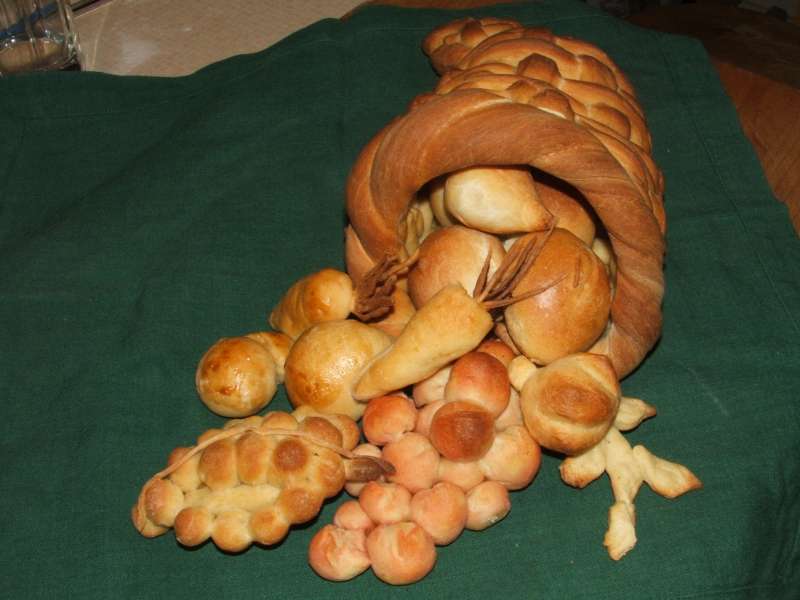 Finally, all the bread was baked and cooled. (It took no time to cool.) We began to assemble the cornucopia. We’d just finished laying it out when our neighbour dropped by. We dragged him into the kitchen to show off the cornucopia.

This is beyond my wildest dreams!!

I have to confess that I didn’t really think it would work. But (as usual) I was wrong wrong wrong. This was insanely fun.

And the best thing is that the whole thing is indeed edible. Even the basket. It was DELICIOUS with coq au vin. The basket part is perhaps not the best bread (a little tough) but the “fruits” are really delicious. I particularly liked the tang of the beet pickle juice on the “red grapes”.

Thank you, Susan, for a splendid afternoon and equally splendid dining that evening!

Of course, I know that you will want to make cornucopia too! Here’s the recipe we were to have followed.

Cornucopia
based on Susan’s take on the recipe for ‘Light Yeasted Decorative Dough’ in “Bread: A Baker’s Book of Techniques and Recipes” by Jeffrey Hamelman

makes one 12-inch cornucopia, several little buns and a small round loaf

* Susan’s recipe has about twice as much sugar. Because this was to be served with dinner, I decided to halve the sugar.

* Susan suggests shaping the cornucopia immediately after mixing the dough. But because we were planning to eat it, I allowed the dough to rise to double first before shaping it.

* If you wish to serve warm bread, reheat it after the loaf has cooled completely. To reheat UNsliced bread, turn the oven to 500F for 5 minutes or so. Turn the oven OFF. Put the bread in the hot oven for ten minutes.

I thought that the cornucopia was going to be really really hard to make (it’s NOT at all difficult to do! In fact it is one of the easiest breads to make) and so decided that it would just be too difficult to pull off along with roast stuffed chicken, cranberry sauce, etc etc. So I once again postponed making the cornucopia again until the last minute.

I actually made the November bread one day before the BBB deadline. And I imagined that I would post it on time. Ha. But it’s still 16 November somewhere in the universe, isn’t it??

The cornucopia and its contents are all demolished now. We finished it off for breakfast yesterday. It was delicious!

Thank you once again, Susan!

Susan (Wild Yeast) is the host of the November 2010’s Bread Baking Babes’ task. She wrote:

Since November is Thanksgiving month here in the US, […] I am asking you to make a cornucopia, a symbol of bountiful harvest and giving thanks, from slightly-yeasted decorative dough. […] Because it’s a “horn of plenty” and not a “horn of gaping emptiness,” a cornucopia does need to be filled.

If you’d like to bake along (of course you do!!) and receive a Baking Buddy Badge to display on your site, bake the cornucopia and post it before the 29 November 2010.

Please remember that the BBBabes’ anniversary is coming up in February. We’d like you to pick the Anniversary Bread recipe for February 2011.

Scour your bread-baking cookbooks, recipe boxes and bread-baking sites to make your choice. We’ll ask you to submit your desired recipe soon. And after we’ve narrowed the list down to a manageable number of choices, we’ll ask you to vote on one for us to bake and post for our anniversary in February.

edit: I completely forgot to add this most amusing post that Susan pointed to: