summary: recipe for Grape/Blue Cheese/Onion Fougasse; information about Not Far From the Tree; submission for YeastSpotting and Bake Your Own Bread; (click on images to see larger views and more photos)

For eons, (since 2009!) I’ve had Mimi’s (Delectable Tidbits) beautiful Grape and Blue Cheese Focaccia bookmarked. Every time I looked at Mimi’s grape focaccia, I drooled and swore I’d make it the next time we had some blue grapes. And at last, I did. Well, actually, I made fougasse rather than focaccia. And I will be making it again. And again…. It’s that good. 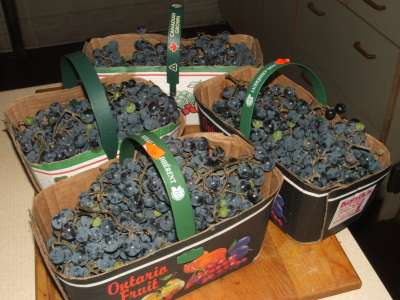 I’ve mentioned before that I volunteer from time to time for Not Far From the Tree. It’s a great way to meet new like-minded people and get “free” fruit as a bonus. Last Friday, four of us spent a happy morning in a tiny garden in the west end picking blue grapes galore. We picked over a hundred pounds and still there were grapes left on the vine!

I loaded my bike as best I could, taking only half of my share and came home with 4 big baskets of beautiful grapes. Sweet, yet with a hint of tartness. And the colour! A gorgeous blue.

And thought about what we would do with the rest of them. Jelly? Jam? Pickles? (One woman had done this with the green grapes we picked a few weeks ago – she said they were fabulous) Clafouti?

And suddenly a lightbulb appeared over my head: Mimi’s focaccia!! Mmmmm, grapes and blue cheese….

I was going to make focaccia. Really, I was. I mixed focaccia dough. But then when it came time to shape it, I found myself shaping fougasse. 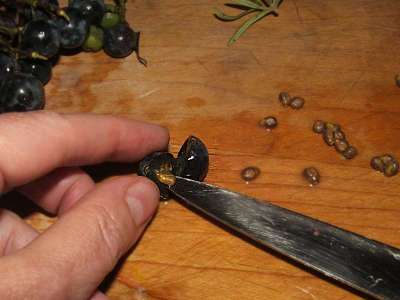 And then I thought about what to do about all those grape seeds. Did we really want to be spitting them out as we ate the bread? Clearly not.

If it had been olives rather than grapes, would I have done this?? Probably not.

But I was so thrilled with myself. The shaped and decorated fougasse was covered and rising and I was humming happily, tidying up and… what’s this?? The blue cheese!!

I forgot to put on the blue cheese!!

Luckily, there was still time to rescue myself. Enough time that I didn’t even have to tell anyone that I forgot.

I just hoped that the salt that I decided to scatter on wouldn’t be too overwhelming. Blue cheese IS pretty salty. 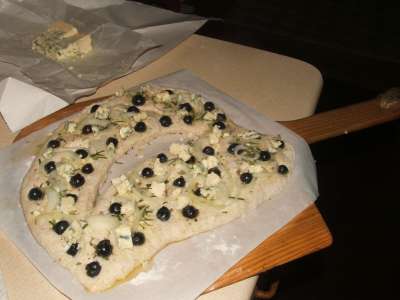 The shaped and decorated fougasse was covered and rising and we were just about to turn the oven on when we did an about-face and put the pizza stone into the barbecue.

Just before 8pm, we sat in the now cool, dark and quiet garden, listening to the rustling of the raccoons in the nearby trees and we grilled meat and baked the fougasse.

Flashlights are handy instruments, aren’t they?

And then we came inside to our dining room, lit the candles, toasted Not Far From the Tree with a clink of glasses of Sangiovese and feasted on grilled pork, steamed green beans, and wonderful, wonderful bread. 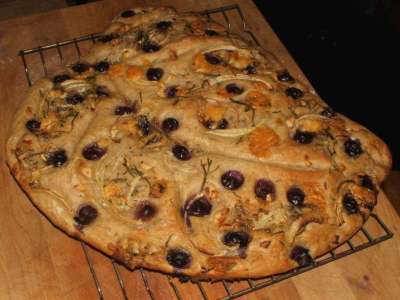 Why, oh why did I wait so long to make grape and blue cheese bread? It’s even more fabulous than I thought it was going to be!

Here is how to make this most delicious bread:

Grape/Onion/Blue Cheese Fougasse
based on the Mimi’s (Delectable Tidbits) recipe for Grape and Blue Cheese Focaccia, the focaccia recipe in “The Italian Baker” by Carol Field and the fougasse recipe in “Tartine Bakery” by Chad Robertson

I’m a little casual about measuring so have included only volume measures, or no measures at all – you’ll have to wing it there.

1.) Water: Tap water is fine to use. Under no circumstances should you use water from the hot water tap. Heat the water in a kettle or microwave (to create lukewarm water, add cold water until it is the correct temperature – use the baby bottle test on the back of your wrist. Or… you can use a thermometer.) Please note that before the yeast is added, the water temperature should be BELOW 120F because yeast begins to die when the temperature is higher than 120F.

3.) Grapes: Of course, green grapes would probably work, but they wouldn’t look quite as pretty. And if you are lucky enough to get grapes that are seedless (Coronation grapes spring to mind), then by all means, use those so you can omit the labour intensive method of cutting each grape in half.

4.) Shaping and slashing: The traditional shaping for fougasse is in a leaf or ladder shape. But it can be shaped in any way you want.

Chad Robertson shapes his fougasse and allows it to rise (covered with a tea towel) for 2 to 3 hours. Patricia Wells shapes and slashes her shaped fougasse at the same time and allows the fougasse to rest for about 10 minutes before baking it. Rose Beranbaum also shapes and slashes at the same time, allows it to rest for about 15 minutes before baking and suggests using scissors (and gentle pulling with fingers) to open up any of the slashes that have closed during that time.

Pizza stones are available at most kitchen supply stores in the larger cities (and possibly the smaller ones too?) in Canada. They cost about $10 and often come with a pizza wheel inserted in the box. They may be a little lighter weight and thinner than a conventional bread stone but the advantage is that they fit easily into a barbecue and they work pretty much as well to protect bottom crusts from burning to cinders. 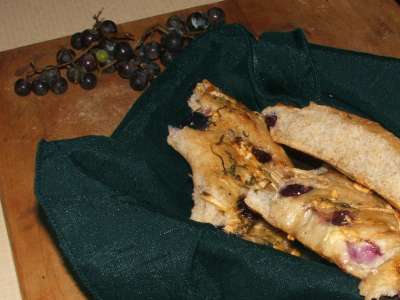 Fougasse is best served still warm and torn rather than cut.

This really was one of the best fougasses too! Each piece tasted like more.

Oh, yes… it wasn’t too salty. It was perfect.

Not Far From the Tree

“Not Far From the Tree” is a Toronto organization that includes a residential fruit-picking program to pick fruit (with permission, of course) that would otherwise go to waste.

There are lots and lots of fruit trees and vines in Toronto!! Bearing fruit that is eaten by birds, squirrels and raccoons. If you have such a thing in your garden and would like the animals to share the fruit with people, please do contact “Not Far From the Tree”. They will send a team of pickers to clean up your yard of fallen fruit and pick the good fruit that is still in the tree. The harvested fruit is divided evenly into 3 portions: one third going to the tree owners, one third going to the volunteer pickers and the final third going to food banks, shelters, and community kitchens.

For more information about NFFtT and how you can donate your time and/or share your fruit, please go to 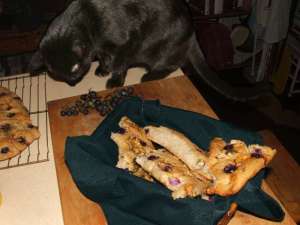 Does anyone else have this kind of difficulty when taking photos?

edit 20 September 2012: Whoohoooo!! A partial mirror of this post is now at Not Far From the Tree (notfarfromthetree.org/grape-and-blue-cheese-fougasse/)! How cool is that?