I know it’s not the weekend but with all these midweek holidays, it FEELS like it so it doesn’t seem at all wrong to be posting today for 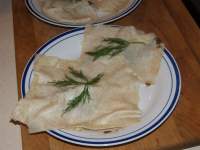 I was working on December 31 until around 10:00 pm. And it was wonderful to come home past darkened houses and brilliantly lit houses full of animated people to our quiet house for an elegant midnight snack that T had prepared for us.

It took a little longer than I expected to take the streetcar home. You wouldn’t believe the crowds!! The weather was great – just above freezing and the sidewalks were clear. The streetcar had to crawl out of the downtown core because there were so many people happily walking to their various clubs and parties. I didn’t get home until around 11:30!! (It usually takes 30 to 40 minutes.) 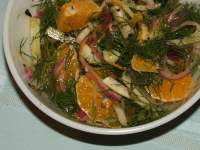 While I was out, T had slaved in the kitchen to make mushroom ravioli*. The night before, I had made orange fennel salad (without the mint).

Because I was going to be gone all day on New Year’s Eve, T and I did our grocery shopping on Sunday afternoon after an “at home” at friends’ house downtown. On the way home, we stopped at “No Frills” to get our New Year’s provisions. Unbelievable!! It wasn’t particularly crowded but it clearly had been. Many of the shelves were entirely empty. There were only two boxes of brown mushrooms and not very many white mushrooms at all. Many parts of the vegetable shelves were completely picked over with only a few sorry looking things left.

We were hoping to get fresh thyme and fresh mint – no such luck – happily, the dill was in good shape. And there were only two (nice looking) fennel bulbs left on the otherwise empty section of shelf. We were completely unsuccessful in getting pimento stuffed olives at all. The party type snack shelves were entirely empty and there were gaping holes on the cheese shelf. I’ve never seen anything like it! It was as if jackals had been there just before we arrived.

If you’ve looked at the beautiful photo on foodTV, you’ll be wondering why our ravioli are not garnished with some of the mushroom. It’s because we didn’t have enough mushrooms! Even though it seemed like there were plenty of mushrooms when we unpacked our groceries. Yes indeed, we’ve learned our lesson – NEVER buy mushrooms that are prepackaged in a box – only the top mushrooms were any good; the bottom ones were just disgusting white slime.

* And so was the beginning of T’s kitchen slavery. It’s not that these ravioli are really that labour intensive. The biggest chore should have been rolling the pasta. The rest should have been simple.

But T had to pick through the revolting mass of what had been brown mushrooms in search of intact mushrooms and then clean off any ooze from the good ones.

Note to self: When buying cheese, rewrap it in parchment paper and discard the heavily waxed brown paper it has been wrapped in by the store.

Things went relatively smoothly after that….

Here’s how T wanted to make the ravioli:

pasta
correction: The total amount of flour should work out to 1 cup for every egg

Serve immediately – on their own as an appetizer or with orange fennel salad as a late night dinner.

We decided not to open our bottle of fizz so late (we saved it for New Year’s Day dinner) and had Domaine Grange Blanche Rasteau 2005 cote du rhone villages instead. Our late night dinner was delicious!!! The perfect way to start 2008!

We MISSED the countdown on New Year’s Eve and only noticed at 12:03 that it was 2008; nobody bangs pots in this neighbourhood…. We clinked our glasses and went on with our feast, then came upstairs to watch a Fred Astaire Ginger Rodgers movie, little suspecting that we would waken to the streets to be covered in snow again by the morning.

One handy thing about this recent snowfall, T put our champagne bottle to chill in a snowbank in the back yard. I love it when we have an outdoor refrigerator! Last night, to go with the fizz, we had fried fish with tartare sauce (all that dill!!), fennel gratin from Patricia Wells’ At home in Provence cookbook, green beans with mustard and boiled potatoes with parsley. 2008 is turning out to be a very good year! 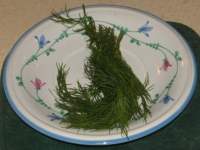 There is nothing like fresh dillweed! And of course, the only way that we here in Toronto can have fresh dill now is by getting hothouse dill from the grocery store. Hothouse dill is not quite as wonderfully dill-like as garden dill but it is still very very good. And it’s so pretty too!

I suppose it’s possible to grow dill under lights at home too but frankly, I am too lazy. Not to mention that I find our indoor herbs to be quite dull tasting in comparison to those that have been grown outdoors in the sun or even those grown in commercial hothouses.

Dill is not only perfect for mushroom ravioli but it is great on steamed green beans and grilled tomatoes too.

The wonderful weekly event, WHB is being hosted by its founder, Kalyn herself (Kalyn’s Kitchen).

For more details on how to participate in Weekend Herb Blogging, please see the following:

edit 3 January 2008: It comes as a surprise that I haven’t featured dill more often for WHB! After seeing Kalyn’s comment that she had not yet grown dill in her garden, I took a look through the gardening books on the shelf here to remind myself of what the experts say about growing dill.

According to Turid Forsyth and Merilyn Simonds Mohr, dill doesn’t even like to be transplanted. The following is from The Harrowsmith Salad Garden:

Dill […] seeds are so hardy that once [dill is established], you will likely have volunteers throughout the garden the next spring. This may be less true of a new variety called ‘Dukat Dill’ or ‘Tetra-Dill’ (CG), developed specifically for its lush foliage and delayed flowering. Dill is an annual herb of the parsley family that grows 3 to 5 feet tall and loves the sun and light well-drained soil. Prepare […] an area [by] digging in organic matter and some lime for an abundant seed harvest. Rake in the tiny seeds loosely. Sprinkle a layer of fine soil over top, and water well. Sow generously: the thinnings are delicious. Pull them until the remaining plants are 8 to 10 inches apart. […] Because dill has a taproot, it does not transplant easily, but when the seedlings ar very young, you can move them by the shovelful to another spot, thinning to one plant per group once they have become established.

And take a look at this excerpt from The Harrowsmith Illustrated Book of Herbs by Patrick Lima:

DILL […] For its own perverse reasons, dill is always better if left to find its own way around the garden. Year after year, we seed a careful patch […] in hopes of having a dense harvest of dill weed in one spot. But each year, half-wild dill appears in outlying corners of the garden, while the planted seeds […] often come to nothing. My suspicion is that […] dill grows best from just-ripened seeds sown in late summer. This, of course, is the pattern the herb follows on its own.

And this from Little Herb Gardens by Georgeanne Brennan and Mimi Luebbermann:

The almost-instant gratification received from growing dill is reason enough to plant [it]. […] How to do it Make sure your container has a drainage hole in the bottom. […] Fill the container with potting mix to within 1/2 inch of the rim. Soak the potting mix with water until it is thoroughly moist. Scoop out approximately 1/2 cup of the moist mix and set asied. Space seeds about 1/2 inch apart and press them inthe tmix gently with the palm of your hand. Sprinkle the sees with the reserved mix, providing a 1/4 inch soil cover. [Pat covering down.] Keep […] moist and fertilize every two weeks with a liquid fertilizer. When to buy spring and summer from garden centers or nurseries as well as mail-order catalogues When to plant Year-round, but spring and fall are most favorable

And finally, this from A Greener Thumb by Mark Cullen:

Dill […] is easy to grow if provided with full sun and average, well-drained soil. Potted seedlings do not transplant easily. Sow dill directly in the garden in very early spring. Give dill lots of space.