summary: recipe for Tah Dig (Bottom of the Rice), adapted from our recipe for Persian Rice in the BloggerAid cookbook; information about saffron and Weekend Herb Blogging; reminder about hunger; (click on image to see larger views and more photos) 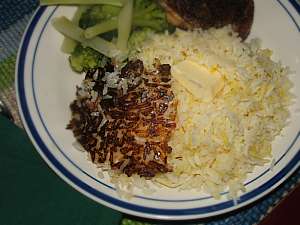 I’ve been meaning and meaning to post about this! How on earth did I forget? (Don’t answer that!)

We submitted our recipe for this fabulous rice dish that appeared in the BloggerAid cookbook released for sale on Amazon in November/December 2009. 100% of the profit for the cookbook has gone towards the UN’s World Food Program (WFP), specifically school meals. ¹

In February, T revised the cooking method rather drastically, making the preparation much easier and ending up with virtually the same results. 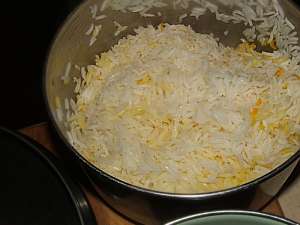 The way that we had made Persian rice before was to parcook the rice over medium heat covered for eight minutes. And then we mixed oil and yoghurt with some of the parcooked rice and spread it evenly in the bottom of a large heavy bottomed pot. Then we mounded the rest of the rice over the yoghurt/oil/rice and cooked it for ten minutes (without a lid). And finally we would follow this step:

Drape a clean tea towel (use one that you don’t care if it gets saffron coloured stains on it) over the saucepan, then replace lid. (The tea towel prevents water from dripping onto the rice.) Reduce the heat to low. Cook, covered, over low heat for 50 minutes. No peeking.

The problem with this is that there is an element of chance as the rice cooks with a lot of simply hoping that the crust would form and all the rice would be done. T realized he would have WAY more control if he simply made rice as usual and made the “bottom of the rice” in a separate pan. The new way works beautifully! 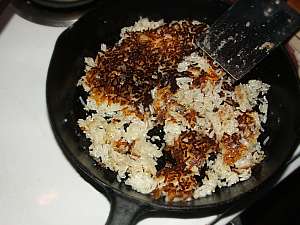 And even better, it eliminates the need for the tea towel. (You have no idea how many tea towels we have that are now permanently saffron stained. :lalala:)

Instead, T cooked the rice completely first and sprinkled it with saffron water. Then he spooned out some of the cooked rice, mixed it with yoghurt and fried it until it was dark gold on the bottom. See? Way way easier!! It was just as fabulous!

Here’s what he did:

Tah Dig (Bottom of the Rice)

Serve with grilled meat and a green vegetable.

The recipe we use was adapted from “Saffron Rice with Golden Crust” that was published in the Toronto Star in May 1998. Here’s what appeared at the top of that recipe:

This style of cooking rice with a caramelized crust on the bottom -- a trademark of Persian cuisine -- tastes divine and is worth the rather fiddly and time-consuming method it entails.

You must use a large heavy pot that is deep and at least 10 inches in diameter. You must also use basmati rice, available in most supermarkets and at any East Indian food shop.

Kian Derakthsan sometimes makes the crust this way with yogurt, but it can also be done with a layer of Persian flatbread , called lawash (thin pita bread can be subsituted), or with sliced potatoes. For the latter, omit the yogurt, substitute 1 medium potato, peeled and thinkly sliced and reduce oil to 3 tablespoons. To form crust place 2 tbsp of oil in a large saucepan or dutch oven. Arrange potato slices in a single layer. Place cooked rice in a pyramid shape over them and continue as directed.

(I’m so embarrassed. I neglected to note the author of the Toronto Star article and the actual newspaper cutting is long gone. I want to say that Lucy Waverman wrote it. Might that be right?? Maybe….) 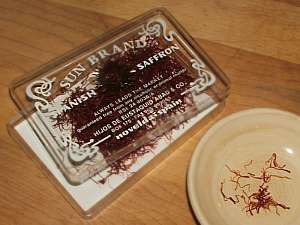 We do love saffron. And even though we can get boxes of Spanish saffron threads from Indiatown at a markedly lower price than anywhere else in the city, saffron is still very very expensive. As I recall, the last box (8x5x2cm) we bought cost $18 (remarkably, there is no weight mark on the box).

Generally, we use saffron on its own or with a very few other flavourings. While the flavour is distinctive, it is also a little delicate and at those prices, it would be foolish to allow its flavour to be lost.

Saffron (Crocus sativus)
Saffron is the world’s most expensive spice and unique in it origin, for [it] is the dried stigmas of the flowers of the saffron crocus. […] [E]very bloom must be individually picked, and every stigma individually extracted by hand. Buy the seed in West Indian grocers and store in an airtight container.

Uses: To use saffron, either infuse a few threads in a cup of hot water […] or crumble the trheads and add directly to the pot. Alternatively, dry roast, crumble and then steep the crumbled threads as done in India. […] A pinch will suffice to colour most dishes, but as its flavour is important too, saffron should not be replaced with other yellow colorants, such as turmeric. Saffron is […] particularly associated with rice dishes, both savoury and sweet [… and …] has been used from centuries to flavour cakes and bread.

It’s no wonder that saffron – the yellow-orange stigmas from a small purple crocus (Crocus sativus ) – is the world’s most expensive spice. Each flower provides only three stigmas, which must be carefully hand-picked and then dried […] It takes over 14,000 of these tiny stigmas for each ounce of saffron. [T]his pungent, aromatic spice is primarily used to flavor and tint food. Fortunately (because it’s so pricey), a little saffron goes a long way.

To glean an amount of dry saffron weighing 1 lb (450 g) is to harvest 50,000–75,000 flowers, the equivalent of an association football pitch’s area of cultivation; 110,000–170,000 flowers or two football fields are needed to gross one kilogram. Forty hours of labour are needed to pick 150,000 flowers. […] A pound contains between 70,000 and 200,000 threads. Vivid crimson colouring, slight moistness, elasticity, and lack of broken-off thread debris are all traits of fresh saffron. Saffron is the most expensive spice in the world. […]

Saffron’s aroma is often described by connoisseurs as reminiscent of metallic honey with grassy or hay-like notes, while its taste has also been noted as hay-like and sweet. […][Saffron] is widely used in cooking in many cuisines, ranging from the Milanese risotto of Italy to the bouillabaisse of France to the biryani with various meat accompaniments in South Asia.

Saffron has a long medicinal history as part of traditional healing; several modern research studies have hinted that the spice has possible anticarcinogenic (cancer-suppressing), anti-mutagenic (mutation-preventing), immunomodulating, and antioxidant-like properties. Saffron stigmas, and even petals, may be helpful for depression.Early studies show that saffron may protect the eyes from the direct effects of bright light and retinal stress apart from slowing down macular degeneration and retinitis pigmentosa.

Saffron is the most expensive spice in the world (anything below 4 € per gram is suspiciously cheap; explanations range from “probably smuggled” to “probably not saffron at all”). In production countries the price is, of course, much lower (one tenth), but so is the quality. Saffron’s aroma is unique and there is no substitute for it. […]

Saffron is rather unique among spices in that its main aroma and colour components are water-soluble; therefore, the stigmata may be soaked overnight in water, filtered and the water then added, which gives a pure and homogeneous colour. Another method is preferred in Persia and India: The spice is powdered and then extracted with a little milk; after half an hour, the milk has the deep colour of egg yolk and is added to biriyanis or sweets. Using the dry spice (whether ground or as a whole) directly for cooking is not favourable, as it releases its fragrance too slowly, and prolonged cooking should be avoided for loss of aroma. […]

[S]affron is necessarily sterile, and its beautiful flowers cannot produce any seeds; propagation is possible only via corms. […] [S]affron is cultivated from the Western Mediterranean (Spain) to India (Kashmir). Spain and Iran are the largest producers. […]

Perennial (hardy in zones 6-8) […] The golden spice of great antiquity. Legend has it that Venus fed it to her husband, Vulcan, to put him to sleep when her lover, Mars, came to visit. […] At about $4500 a kilo, saffron is the world’s costliest spice; it takes the stigmas of about 150,000 flowers to make one kilo. As costly as it is, it is nevertheless quite easy to grow in the garden; but north of zone 6 it needs to be wintered indoors in a cool place. About six plants are needed to produce enough spice for one recipe. It’s lovely lavender blossoms in fall are an added bonus. Due to plant import restrictions, this item can only be shipped within Canada and the U.S.

– Richters (search for “saffron” in the catalogue)

Well! I never thought it would be even a remote possibility that anyone could grow their own saffron! Of course, it would have to be labelled very very carefully. Crocus sativus looks a lot like regular crocuses: Colchicum autumnale. And those are highly toxic.

This week’s WHB host is Cristina (La Cucina di Cristina). The deadline for entering WHB#293 is Sunday 5 August 2012 at 15:00, Utah time (GMT-7). For complete details on how to participate in Weekend Herb Blogging created by Kalyn (Kalyn’s Kitchen), please see the following:

edit 7 August 2012: Cristina has posted the roundup. Please take a look at all the other wonderful WHB#345 entries:

The Bloggeraid Cookbook is still available for purchase.

All the recipes in this cookbook are favourites from our kitchens. We hope that when you get your copy of the cookbook, the recipes will become your favourites as well.

100% of the proceeds for the BloggerAid – Changing the Face of Famine Cookbook go towards “School Meals”, a part of the UN’s World Food Program. 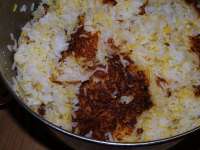 While there IS enough food (including rice) for everyone, not everyone is getting it. There are still far too many truly hungry people.

The world produces enough food to feed everyone. World agriculture produces 17 percent more calories per person today than it did 30 years ago, despite a 70 percent population increase. This is enough to provide everyone in the world with at least 2,720 kilocalories (kcal) per person per day […] The principal problem is that many people in the world do not have sufficient land to grow, or income to purchase, enough food.

Of course, there is much more we can do, but here is an easy way to make a start: