Waiter, there’s something in my… pie! 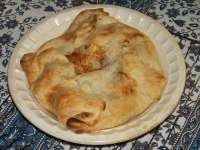 Apple pie always makes me think of my grandpa, who(m??) we loved to hear reciting this ABC:

Ever since my mother taught me how to make pastry, I have prided myself on my pies. As I recall, it was I who made the pastry whenever we had pie for Sunday dinners. I was so impressed with my pie making abilities that when I was 12 (or 13??), I entered a Macintosh apple pie I had made into a baking competition. I had carefully carved the most beautiful stylized apple in the top crust. I was sure my pie would win the contest.

I vividly remember standing by the table as the judges began to assess the entries. And I remember my horror as I watched a perfectly coiffed woman, her scarlet fingernails glistening, pick up a spoon and summarily jam it right through the center of the beautiful apple design – without even noticing that it was an apple or that the words “apple pie” were neatly etched in a semi circle around the bottom edge of the pie – and stuff some pastry and apples into her vermillion lipsticked maw.

She murmured something about cinnamon, sugar and apples not keeping their shape, made a few marks on her notepad and picked up another spoon in preparation for mangling the center of the next entry on the table. I was devastated.

But it didn’t stop me from making pie; I knew that I made the best pastry in the world even if I didn’t have the blue ribbon to prove it. Because it really is good pastry: flaky, light, crispy in just the right places.

For years, when we wanted pie, T would ask me to make the pastry. But once, when I was working overtime a lot, he asked me if I’d show him how. No problem. Because it’s really very easy to make great pastry. And you know what? I have been removed from my pedestal as the best pastry maker. Yup, it’s true. I can still make great pastry but the student has surpassed the teacher and now T makes the greatest pastry and the greatest pies.

Here is our pastry recipe:

Relatively recently, T has taken a new step in the preparation of the pie. Instead of rolling out two crusts and fluting them together (as in a rhubarb pie made last summer), he rolls out one large round, piles fruit in the center and then folds the edges over into the center. No need for poking vents to let the steam release. No need to have any largish sections of unfilled pastry at the edge of the pie.

Sure, it doesn’t look perfect. Well, actually, I think it does look perfect. But you know what I mean. It isn’t round and the edges don’t have fancy fluting. However, the taste is darn close to perfection.

For WTSIM… pie!, we decided that apples would be the best fruit to use. Mainly because apples are pretty much the only local fruits available in the dead of winter. Okay, you’re right. It’s really mainly because apple pie is my favourite kind of pie.

I no longer think that Macintosh apples are the ideal apples for pie. I don’t mind a couple of them but they really do break up with cooking. I have been swayed by the argument that at least some of the apples should hold their shape. (Rest assured that it was NOT because of what the baking contest judge said… it’s actually because Ontario Macintosh apples don’t have the same sparkling flavour as the BC Macs I remember from my youth).

I also used to think that if some cinnamon was good, more must be better. But we forgot to put cinnamon in an apple pie a while back and were wowed by the pure flavour of the apples. So this time, we put in a very small amount of cinnamon – just enough to give a hint of cinnamon flavour but not enough to overpower the apples. It’s the way to go!!

Now, I know that the rules specifically state that the pie be closed in order to qualify as an entry for WTSIM… pie!. Even though there is a largish hole at the top of the pie, I consider it to be a closed pie. And for the literal-minded, there is that little bit of cinnamon covering the section at the center of the pie. (Have I managed to wiggle my way into having followed the rules to the letter, Jeanne? :-))

Here is what T did for this most recent apple pie:

Serve warm with creme fraiche, yoghurt or thinly sliced cheddar cheese – or, if you must, vanilla ice cream. 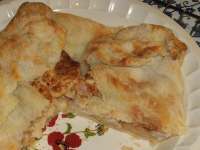 Oh yes and one more thing; apple pie is great for breakfast! (click on image for larger view and more photos)

Jeanne (Cook Sister!), Johanna The Passionate Cook and Andrew (Spittoon Extra) have just launched this intriguing new food blogging event to take place each month in 2007. The second WTSIM… is hosted by Jeanne. She wrote:

The theme for February will be (drum roll…) pies!

Aaaaah, pie. One of life’s great joys when made well, one of life’s great disappointments when not. Sweet, savoury, chunky, dainty, warm cold… there really is a pie to suit every occasion. Now, in keeping with WTSIM’s spirit of inclusiveness, we have decided to leave the decision up to you as to whether you want to make a sweet or a savoury pie, so whether it’s your Grammy’s apple pie or your Uncle Basil’s famous steak & kidney pie – either will do! The only little limit we have set, though, is that it must be a closed pie – in other words, no flans or tarts or quiches. The filling must be invisible when the pie is served. So fish pie would be OK, but tarte tatin would not. Everybody clear?

The deadline for WTSIM… pie! is 26 February, 2007. If you would like to participate, please read the following for more information:

More about A: Apple Pie – Augh!! I cannot remember all of Grandpa’s ABC!! This is what I do recall:

I iced it??? Alas, I cannot remember. So I googled… but I don’t know if Grandpa was quoting the Kate Greenaway version or if he was quoting from a different version he heard in his own childhood.

My feeling after seeing the following is that it was indeed a different version from the Greenaway, because I seem to recall now that “S stole it” rather than “sang for it”.

The Tragical Death of A, Apple Pie Who Was Cut In Pieces, And Eaten By Twenty-Six Gentlemen, With Whom All Little People Ought to be Very Well Acquainted

And yet another version:
A, Apple Pie

And one more:
A, Apple Pie